Omda is receiving the title for the 3rd time in a row being the Fittest Man in Egypt in 2015 and 2016 as well. Omda proves that a champion will always be, he started his fitness life as a rower where he won many national and Arab championships and is completing it as one of the most important CrossFitters not just in Egypt, but the Middle East. Along the 5 weeks, Omda‘s results were as follows:

Rana El Deeb, the CrossFit L1 coach,  was ranked 90th on the region. This year, she managed to jump 43 spots to settle at the 47th and received the title of The Fittest Woman in Egypt. Rana is promising more in 2018, she is always striving for progress not for perfection. Along the 5 weeks, Rana‘s results were as follows:

Going to the Scaled division, Ziad El Feky, is proudly ranked second worldwide and first in Africa. Ziad was previously ranked first in ELFIT 2016 Scaled male division and he is looking forward to the Rx’d division in The Games. 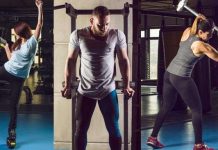 Hegazy, First egyptian to swim from Jordon to Taba