Home Success Stories In health and in sickness, those fitness gurus did it Who said it will be easy? I think no one who achieved a real thing. Road to success is always filled with obstacles and no more difficult obstacle for a sports person than injuries and diseases that might hinder his fitness career.

However, those inspirational gurus prove that yes it wasn’t easy and it was a downside, but because they were persistent enough to reach their destination, they did it!

Imagine if fitness is all your life and suddenly you can’t walk! This is literally what happened with, Ali            Ismail, founder of Move and strength and conditioning coach. Three years ago, Ali was diagnosed with a       severe L5/S1 Herniated disc and a Bulging L4/L5. The problem wasn’t just exercising, Ali reached a point       that as we said couldn’t walk out of severe pain in his leg.

When an ordinary person has a pain in a certain part of his body, he chooses to rest. However, this is not       the type of choices Ali would go for it. Ali chose to get out of this by stabilizing and strengthening his            core. This is not everything. Ali didn’t resort to a specialist, he decided to develop his knowledge of                Rehabilitation through academic research and attending seminars in Egypt and Spain.

Ali didn’t stop his knowledge at solving his case, he is now helping other people to overcome their injuries.   We are in front of a real champ who didn’t get frustrated at anytime and who didn’t permit this downside to   take from him, on the contrary it added to him and made him help others too.

Can denial be your only exit to survive? This is the method Ekramy Tantawy followed in facing Diabetes.
Ekramy won swimming international championships since the age of 10.
Then the medals and records rolled and he became a member in the National team.
Ekramy is strong physically and spiritually, but this strength didn’t save him from receiving being diagnosed with Type 1 Diabetes as a shock in the beginning.

However, Ekramy chose to fight diabetes with denial. His opinion was that if he believed that he is sick, he will get sick.
He continued in the fitness thing by converting to Crossfit.
He is now a head coach at CrossFit Pharahos and a Triathlon champion, as well.

Ekramy‘s goal in life is to change the idea of Diabetes and people’s belief about it that it could hinder            them from achieving their goals. His dream is to be one of the top CrossFit athletes in Africa.

It’s different this time. Muhammad Ali 3asab founder and technical director of Balance Gym started his bodybuilding career at the age of 32 and after a cruciate ligament surgery which is almost impossible. But it seems there is nothing impossible when there is belief.
3asab didn’t only perform ordinary in this field, he was qualified to Mr Olympia of Jordan and Weider Cup at Dubai Fitness Expo.

The source of inspiration of many guys and source of admiration for a lot of ladies is another proof that an injury can’t stop you! Aly started his fitness life as a football player in Maadi club, then he reached the desired milestone for most footballers, which is joining Al Ahly Club and spent there times of success and achievements.
But suddenly it turned upside down when he got an injury which sidelined his football career.

However, Aly didn’t give up and he changed the path of his fitness ambitions to something else where he       founded BeFit. He is now considered one of most prominent Egypt’s athletes and represents global                 brands like Nike and Polar Fitness.

Being a fitness instructor doesn’t only require fitness experience and training, it also requires a positive spirit that is very essential in coaching people. But imagine if you suffer something like brain tumor and you’re required to motivate people and help them to meditate and relax. It seems that from the deep of Sally‘s pain came her positive vibes that she keeps spreading everywhere and that this physical and psychological problem made her one of the most important Yoga instructors in town! Aly Mazhar “Go get it” 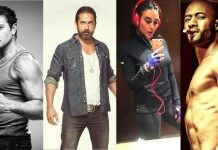