Home Success Stories World champion Asmaa Al Zohairy is the living proof that it is... Founder of ScullnBlades rowing school, Asmaa Al Zohairy is a rowing athlete, a fitness coach, and Nike trainer and brand ambassador for Egypt. She’s been on the national team for the sport of rowing for 4 years and has been breaking records left and right. Some of her accomplishments include being both world and national champion, holding a world record in indoor rowing and an Egyptian record in lightweight women, and a finisher of 2 full marathons and a number of triathlons. In an exclusive interview, Asmaa tells us more about her journey.

Her story with rowing

I started rowing at 27, which is relatively old in the stereotypical world of sports. I used to see the boats on my daily trips around zamalek, and I had a lot of friends who were very passionate rowers or ex-rowers, so I was really intrigued. I wanted to try it out. Before rowing, I was an aerobics instructor then a functional fitness/crossfit coach, I used to run, and I finished marathons and triathlons, but never before had I any experience in a sport. I learned rowing in an academy that was open for people over 23. Along the way, I discovered so many things about rowing and about myself. Right now, rowing is a passion that I am turning into a business.

In 2015, I started going to the rowing academy, and joined the club’s team to train professionally 2 months later.  A year after that, I raced at the national championship and joined the national team not so long after. This was all new to me because I was never a competitive athlete before, and it was another journey on the national team for the next 3-4 years. Last year, I founded my very own ScullnBlades and have been putting my all into it ever since.

On being an athlete

I don’t like to think of myself as only an athlete, because, to me, the journey of an athlete is a very personal one. It’s you doing the work and you reaping the benefits. It’s not so much about the sport or the community as much as it’s about you sort of glorifying yourself and your work, not that there’s anything wrong with that. I personally believe very strongly in the concept of giving back and would love so much for people to know more about the sport and not just my accomplishments. This is why I do coaching and it’s one of the main reasons I started ScullnBlades.

ScullnBlades is the name of my rowing school, using sports equipment for reference. It’s an academy that provides rowing as a service to keep fit, lose weight, and build muscle. We also help you with building your character by tapping into the athlete within to write your own story, all while enjoying the view of a very captivating Cairo. Our academy is open for all ages and we require absolutely no prerequisites. We started off in zamalek almost a year and a half ago and are currently operating in Maadi.

We now have a team, a crew, that formed a quad boat that competed at Masters regatta. Our family is now a little under 100 members, beginners to advanced.

Even though it’s gained some attention after its association with crossfit, I still don’t think rowing is getting the attention that it deserves. A lot of people usually have doubts and wrong ideas about the sport that keep them from trying it out. I’ve always come across people who thought they wouldn’t make it because “they don’t have enough muscles” or that their “upper body isn’t strong enough.” People are also always worried about the Nile and its water. Rowing as a sport has so much uncovered potential. It’s also an excellent workout because it works 85% of the body’s muscles on all kinds of levels. It could be utilized as either a weights exercise or a cardio fitness exercise, or both.

I had an amazing journey so far and I experienced a lot with rowing and I would love for people to experience that for themselves, and that’s what I’m going to be working on from now on. 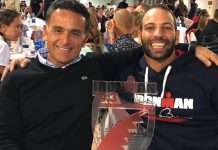 Sherif proves to the world zumba isn’t just for ladies Jobs in the morning and fit at night: 17 athletes who...