Home News 2020 Pyramids Half Marathon: A bucket list item to tick off this... 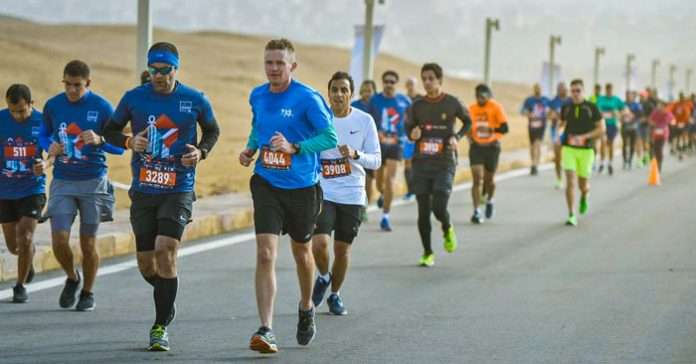 The TriFactory is proud to welcome runners to the Pyramids Half Marathon, its flagship running event at the Great Pyramids of Giza. The event takes place on Saturday, February 22nd, 2020, and features three exciting distances: 21K, 10K, and 6K. The Pyramids Half Marathon will feature brand new race courses, building on the success of the inaugural event in 2019, that will see athletes from all over the world running right through the heart of the Pyramids.

As a major sports event in the heart of the last remaining Wonder of the Ancient World, the Pyramids Half Marathon has great potential to boost tourism and showcase Egypt’s historic beauty to the world. Last year’s event brought together 3600 runners representing 77 different nationalities, and The TriFactory is looking forward to welcoming even more runners to the 2020 edition of the event.

The Pyramids Half Marathon boasts 100% paved roads which are entirely pedestrianised during the course of the race, a major advantage for runners that is in line with international standards. All three races are also timed using the MyLaps timing system, the same technology deployed at the Olympic Games, further cementing the Pyramids Half Marathon’s pedigree as an international calibre road running race. The event proudly falls under the auspices of the Ministry of Youth & Sport and the Ministry of Antiquities, and is supervised by the Egyptian Athletics Federation.

The three days preceding the event will feature an Official Event Expo at the Greek Campus in Downtown Cairo, where all athletes will be able to collect their race kits. The Expo will also feature race briefings, speeches by public figures,official race merchandise, and more. To find out more information and register for all three races at the Pyramids Half Marathon – 21K, 10K, & 6K – please visit www.pyramidshalfmarathon.com.

General information about The TriFactory:

The TriFactory was founded in 2015 to spread endurance sports to the general Egyptian market. Since then, the company has moved from strength to strength. Its flagship event, the Sahl Hasheesh Endurance Festival, has grown to become the biggest multi-sport event in Egypt and is quickly becoming one of the biggest in the entire region, rivaling events in Dubai, Abu Dhabi, and Morocco. As well as the Sahl Hasheesh Endurance Festival, The TriFactory organises other major events including but not limited to:

1) Aswan Marathon, organised in collaboration with the Magdi Yacoub Heart Foundation Marathon and with 100% of ticket proceeds being donated to the Aswan Heart Centre.

2) The Pyramids Half Marathon at the Great Pyramids of Giza, a running event that saw 3500 runners from 77 nationalities participating, and is organised under the auspices of the Ministry of Youth & Sport and the Ministry of Antiquities.

3) The TriFactory is also proud to be the official license-holder for all Tough Mudder events in Egypt, the first of which took place in December 2019 and attracted 1300 event participants.

4) The Endurance Festival – as well as the flagship event in Sahl Hasheesh, The TriFactory has also organised versions of this event around Egypt, including at the Montaza Palace & Park in Alexandria, and at Azha in Ain Sokhna.