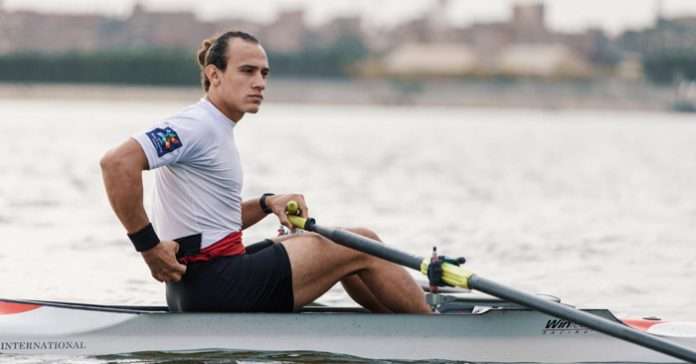 Inspired by his father, Ali Alaa started rowing in 2006 and hasn’t stopped since. In the past 14 years, Ali fell in love with the sport, joined the Egyptian National Team, and participated in many national and international championships. Along his journey, he accomplished many milestones including winning first place in the National Championship back in 2008 and maintaining it for the 10 years that followed. Other first places of his were at the 2012 African Championship and the 2013 Arab Championship. He ranked 8th in the 2013 World Cup in London and 19th in the 2019 World Championship in Austria.

Ali joined the National Team and became a professional rower in 2010 when he was still a uni student. He graduated from Cairo University in 2014 with a degree in Commerce and finished his Sports Management Diploma at the European School of Economics in Spain 6 years later. Today, the 28-year-old is still in Madrid finishing up his studies and his internship at the Football Data Analytics Company-Driblab. The professional athlete will be returning to Egypt to resume training for his rowing peak years in pursuit of the Olympics dream.

How has rowing impacted your life?

“Rowing gave me an identity. I believe that sports -through training and competitions- teach you very important life lessons. Rowing has taught me patience and the true value of hard work. You learn to not only trust the process, but to enjoy it as well. Good days happen, bad days happen, it’s all part of the process so learn to keep up the hard work and make sure your actions and work ethics align with what you want to do.”

What keeps you inspired?

“My family and their continuous support and love. I’m also inspired by the journey itself: the ups, the downs, and the obstacles. The road to success is never a straight one, and I find all the little twists and turns inspiring.”

Wishing Ali the best of luck in his 2024 Paris Olympicsjourney.