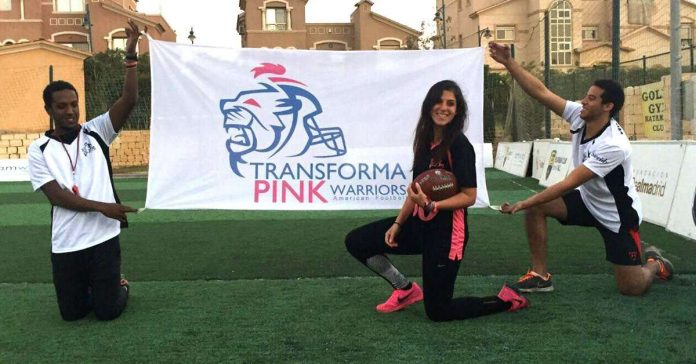 Witnessing the first female American football match in the Middle East, we couldn’t have missed the chance of interviewing a member of the winning team, Alia El Banna. Alia is a defense footballer in Transforma Pink Warriors, the first female American football team in Egypt, a captain at Cairo Runners, and a KG teacher. Transforma Pink Warriors beat She Wolves 33-26. Our conversation with Alia started with an unexpected statement! 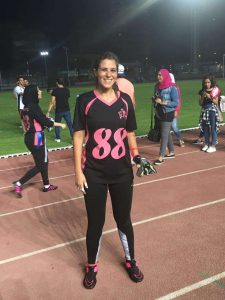 We wanted to start with Alia with her journey since childhood with American football, but Alia surprised us that she started the whole American football thing just with the formation of the team and have never played any kind of ball games before! Alia used to go to fitness and zumba class at the gym and run with Cairo Runners, her relation with American football was just going to league male matches that were organized by the head coach of Transforma Pink Warriors, Calosha. That was when he initiated her with the idea of forming a female flag American football team, to be the first in the country. Alia told us honestly that she found the idea difficult at the beginning and she had never believed that she could play this game one day! However, it happened!

Building the team and the team building! 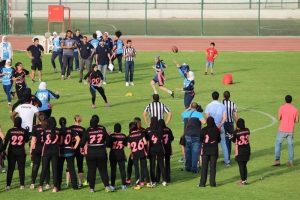 No more surprises when Alia told us that the team was formed from girls who had never played this sport before, some of them were volley ball players, while others were just fitness classes’ attendees which eased the issue somehow, but the real challenge was the technicalities of the game itself. Alia confessed that for the first 3 months, she wasn’t able to catch a single ball. However, now she is capable of catching 8 balls out of 10. She added that this was achieved simply by hard training.

Asking Alia to reveal the matter of playing a team sports in a society like ours, not adapted to teamwork, she said that, thanks to, their coaches they became one team. She explained that their coaches used to arrange activities to break the ice between them and make them challenge each other during the trainings. Alia sees that at the end all of them have one goal which is mainly spreading this sport in Egypt and this is the secret that unites them.

This is the reason, from Alia’s point of view, that made a number of people more than they assumed attend the match. Alia elaborated that despite the fact that this was the first female match in Egypt and the sport itself is not popular enough, people were excited to see this new thing. She added that the male footballers who attended the match told them that the audience number is bigger than what they mostly receive in their matches! Not only people watched the match and went home, Alia told us that some of them asked about joining the team.

This was Alia’s reply when we asked her to state one thing that made them won the match. Alia believes that this is what makes them different; she is always confident with her team and sure that they can do it! She mentioned that at the beginning of the match the other team was leading, but this didn’t make them give up. On the contrary they exerted much effort.

Yes Alia do want ones! This is how Alia started when we asked her to say something to their opponent in the match, She Wolves. She clarified that they wouldn’t have played the match if there was no rival. She stated that they are a very clever team and exerted much effort and she wished they could meet again in future matches.

This was Alia’s point also when we asked about the efforts that could be done by different parties to spread this sport. She believes that others enthusiasm to form such teams is the key as they are aiming to reach 11 teams so they can play a league in November. She added that they are working on forming a kids’ team from girls, and boys as well. 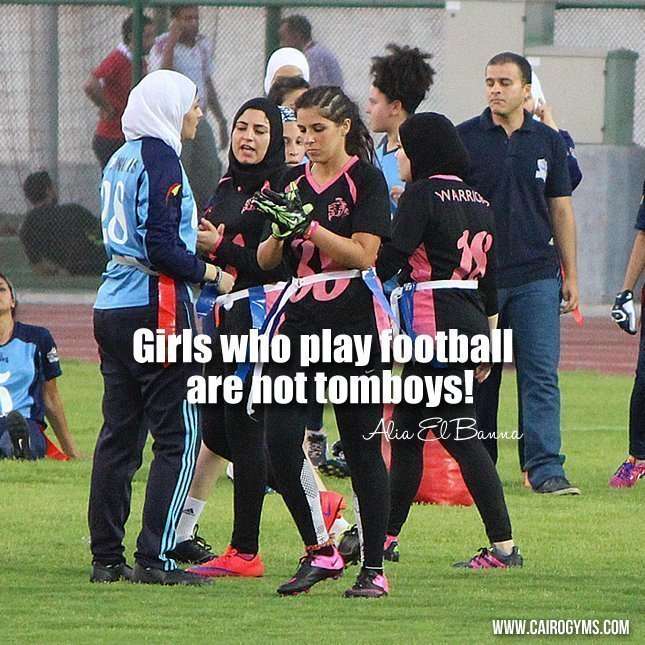 Our interview with Alia can never end without letting her reply to common stereotypes regarding girls playing football. Alia assured that men’s bodies give them no advantage in such sport. She affirmed that both men and women can play football or American football, it’s about training. The other stereotype that annoys Alia is that girls who play football are mannish. Alia said that there is no actual relation, either physical or appearance wise. She clarified that many people say that such sports change a girl’s body to a masculine one, but this is a big myth, a girl’s body remains the same, even if she lifts weights, she won’t get bulky unless she is taking supplements. Regarding appearance, she believes that this goes to the girl herself; she can play football without this affecting her feminine look.

This was also her advice to young girls who have passion in starting such sport. She asked them to not let such stereotypes make them give up their dreams! And this was the best ending to our interesting conversation with Alia.

Actually Alia is not the type of ladies you meet every day. Alia has a career and passion, as well and she started from where many people could end paving the road of empowering women.