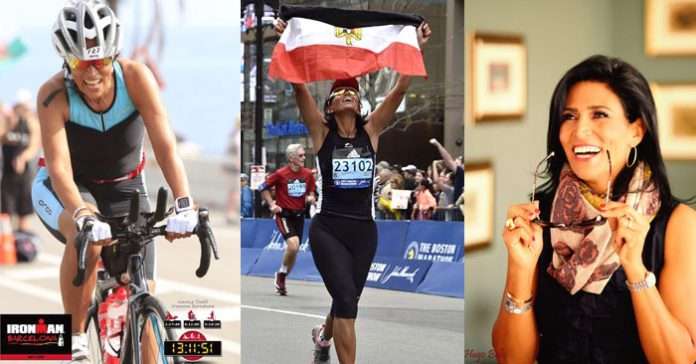 Amany Khalil,  an Egyptian mother and wife, has found meaning and freedom in running. Starting in the US 26 years ago, she has completed 20 full marathons, and 2 out of the top 6 marathons in the world: Boston, London, Chicago, New York, Berlin, and Tokyo marathons. She has completed her milestone, the Iron Man race in 2016, hitting the line in 13 hours and 11 minutes.

Amany has answered almost every question we’re thinking of, so take notes as you scroll through.

Iron man is an endurance race, meaning that it lasts really we have to complete 3.8 km swimming in open water ( ocean), then we cycle for about 180 km, after cycling we run a full marathon of 42.2 km.

“TIPS: Before, during, and after”

“There is a first time for everything”

A first time runner can join the Pyramids marathon, they do not have to be watching the time trying to complete it fast, however, they can take their time and  just feel the run.

Dealing with a slope is really important, as slopes are not easy for runners, beginners or advanced. Runners should take the slope In really tiny steps, not exerting too much effort or energy. Running tiny steps or even walking the slope will be the best thing to do.

We stock up on protein. Using ice, or even getting a massage could really help. We must rest a few weeks before running again, and about 2 to 4 weeks before joining another marathon. Again, we should eat well, we deserve to eat. Some days you will not be able to go down and up the stairs without pain, but it all heals gradually.

“The different kinds of runners”

Well, there are the elite runners, they are usually very well trained, and they join races for the prizes ( money). Then, there are the amateurs, who are not as fast as the elite, but they are pretty good, and they mostly run for fun. Of course there are runners of different genders and ages, however people under 18 cannot join marathons, as their bones are still maturing. I hope that one thing in common between all runners is their passion, running is a tough sport, so I am hoping it’s the adrenaline that bonds all runners.

When I first knew there would be a marathon at our great Egyptian landmark, I got goosebumps, although I ran in Rome, and passed by its ruins and the Colosseum. Running near the historic pyramid certainly gave me a great feeling.

I want to tell all runners: pace yourselves, don’t go fast to avoid tiring yourself, enjoy the race and embrace the scenery.

This article is brought to you by Redbull Egypt.