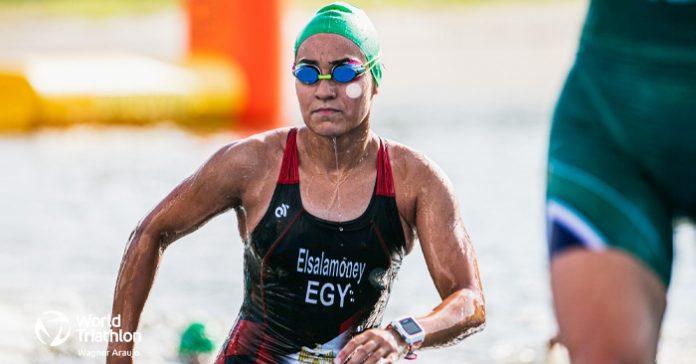 Basmla Elsalamoney, a dentistry school senior, like many Egyptian kids, has been encouraged to practice swimming by her parents when she was young. Basmla demonstrated a great potential in swimming, she started focusing more, getting better, and achieved many national championship titles, only at age of 14. Her coaches realized her talent, she could do great when going into long distance swimming and open water. let’s get swimming!

In her first appearance in the open water, Basmla finished 4th in the 5km open water national championship, attaining the silver medal!  In her second attempt, she finished 5th in the elite category at the 10km women’s race!  With several achievements, Basmla got through with swimming, but she didn’t want to finish her athletic journey at 17.

Three is Better than One

“I decided to try something new, I asked and searched until I found the worlds of Triathlons. With the motivation from my swimming head coach, Mr. Mark, I gave it a go! I looked for a good place and coach to help me get started, until I found Coach Ahmed Salama, admin to the biggest Egyptian Facebook Triathlon Group.

We figured that with my swimming potential, overall fitness, and sport background, I could hit high records in this sport. The onset of my triathlon career wasn’t bright, I fell twice off the bike in my first attempt. Later on, with two months of proper training, I was able to grasp the 2016 Pan Arab Triathlon Championship for the junior women category. At the end of the year, my coach saw that I could qualify to the Olympics with the proper preparation and plan, and we started working together towards this goal.”

On to the Olympics

The coach put a long plan with progression and decided to let Basmala race in all the amateur races that cross their path in 2017 to gain experience. The highlight of these races was her silver medal overall at the 2017 Abu Dhabi World Championships Series for Age Group, and she was able to win her category as well!

In the 2018 the aims and goals went high as Basmla started to race the international elite races while in her first appearance with elite; Basmla was able to finish 8th and earn ITU world ranking points while she was still a junior. Three weeks later she was able to dominate the 2018 African Triathlon Championship in Women Junior.

With both results, Basmla proved that she had a great potential to start working harder and farther for the Olympics qualification. When the qualifications started, she opened the qualification with a bronze medal in the 2018 Aqaba Triathlon Cup.  In the first period of the qualification, she soared high from 11th in the elite Continental ranking to 2nd! Unfortunately, at the end of this period Basmla had an accident during the bike training, an accident that could end her athletic career!

She had to undergo a surgery later for the left knee, partial meniscectomy. It took her more than 2 months of comprehensive rehabilitation to be able to get back to training.

The Knock and Rise

“After the surgery, I knocked every door to get back with the required rehabilitation process, I worked up to 6 hours a day just for rehabilitation, and I get my legs back to the full range of motion to be able train well again. My coach and my doctor found that I’m able to take part in the first race at the end of July 2019, just three months from the accident, and we started work together. My first race back after the accident was the 2019 African Games in Rebat, I dominated the Elite women race in the triathlon with a gold medal and bronze medal in mixed team Relay!

At this time, I was somewhere far from the form that I had reached in the previous period. My coach, instead of raising the bar to a higher level of races such as world cups and so on, he designed a mandatory plan to finish the year with some good points and keep my Olympic qualification spot. The covid-19 pandemic took place and affected my fitness level again, with the rescheduling of the Olympics, I had only one choice to not let my dream fade.”

“I started to improve my fitness level again towards Tokyo 2020. Although there was news of it being postponed again or cancelled, but I kept my aim high, and worked hard, and I finally achieved my dream of becoming the first ever Egyptian to qualify to the Olympics in the sport of triathlon, and the first Arab as well. it was exhilarating being the youngest female on the start-list.

Last week, I got the silver medal at the iconic 2022 TriYas Elite race in Abu Dhabi, invitational elite category, and had a great weekend dominating both sprint and super sprint races in the 2022 Let’s Tri by Stamina!

Basmala was able to dominate the 2022 Egyptian Athletics Championship, the gold medal of the women’s 10000m final, and silver medal of the women’s 5000m final. She also won both races last year and a total of 9 medals 4 golds and 5 silvers since she started taking part in the athletics field. She also attained the 2021 Egyptian CYCLING National championship, and the U23 Time trial gold medal!

“Passion first and everything will fall into place.”