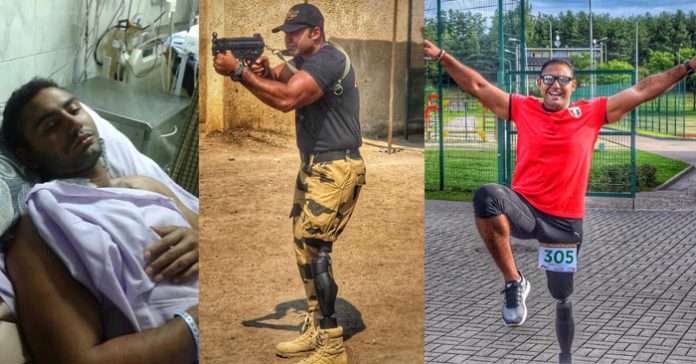 Before his injury, he was a member of  the national Egyptian team and a world champion in both kung Fu, and kick boxing.

Travelling around for Kung Fu championships, he won 3rd  in Africa in Libya,  3rd in the world in China, and 1st in Africa in Tunis. He entered the military academy, taking the title:  The best athlete in 2010. He was given the same title again in 2012 in the armed forces. Captain Ahmed was honored by the minister Sedki Sobhi, and the President Abdelfatah El-sisi

Later, he was taken into the special forces ( Al Saaqaa). He had to move to Sinai, where he got injured because of terroristic acts. His injury forced him to stay in the hospital for about a year and a half. During his stay, he went through 18 surgeries and operations.

Before he traveled to Germany to continue his medical journey, he played in the adaptive  championship. He joined a sport called “orienteering” ( melaha reyadeya), which is relatively new in Egypt. He competed on that sport championship In Sweden in 2016, ranking 23 out of 60 in the world, and has been again, honored by the Egyptian president.

He then continued his therapy in Germany for a year, regularly training after fitting his artificial prosthesis. Another orienteering world championship awaited him in Russia, in 2017. The captain returned back to Egypt, and decided to take a shift to bodybuilding, which was his first step to join the Muscle Mania championship. Unfortunately, due to his back injury, he was unable to travel and compete.

He played power lifting as it caused no problems for his back. He participated in Egypt’s power lifting championship, and ranked 6th in Egypt! This champion just never rests, as he became more fit, he joined the CrossFit championship  held in Egypt, ranked 1st, But unfortunately dropped out.

Ahmed Mido Now is everywhere around boxing, powerlifting, gym, and CrossFit. An injury could be just an alternate route that leads you to the best possible destination. Remember, the greater the obstacle, the more glory there is in overcoming it!