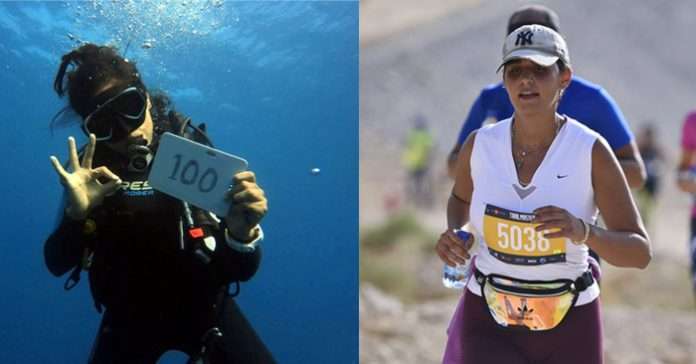 Farah Shimy has been an athlete her entire life. Ever since she was a child, her parents made sure she and her two brothers were always busy, and they chose sports to fill their afternoons. Very early on, Farah practiced ballet, gymnastics, swimming, and volleyball. Swimming was her favorite because it taught her how hard work pays off; “the more you put in practice, the faster you get in your timings.”

Swimming as an individual sport was not enough for her though, so she sought a team sport. In volleyball, Farah learned the true meaning of collective effort. With coordination and efficiency, her team won trophies on a national level.

As a teenager, Farah was a gym addict who picked up yoga along the way. Through yoga, she discovered a new concept of movement – to move consciously, ensuring mental and physical alignment.

A few years later, Farah got into CrossFit, took yoga more seriously, and explored the underwater world through diving. Today, Farah has finished her 100th dive as an Advanced Diver.

2020 unlocked a new world of sports for Farah: outdoor running. Being a gym rat, the treadmill was her running solace. With gyms being closed and quarantine, outdoor running became her refuge; it was therapeutic and she would run hours on end.

Professionally, Farah works in marketing communications and media. She started in advertising, then ventured into the media world with NRJ Radio Station to later join the forces of Nogoum FM. She also works in the Communications department of the Ministry of International Cooperation.

Swimming and volley continued with Farah throughout college, where she was an integral part of AUC’s swimming team. Even though she hadn’t been consistent with her swimming for the last couple of years, Farah found her way back during this year’s Oceanman competition. Initially, she had joined to support a friend but ended up swimming the 5k and winning 3rd place in her age category and 10th female overall. The competition rekindled her passion and reminded her of how much she truly loves swimming.

How was Oceanman? Was it anything like competing as a child?

I had never done such long open water swims before; I used to be a sprinter. However, I loved joining the new era of sports and competition. Back in the day, we did not have such meets and events. The sports scene has changed a lot. There’s more inclusion these days and the approach to athleticism has become more holistic. Sports have become much more accessible and the awareness of how important sports are is now more common. There has also been an introduction of the private entities in sports, and they have changed the game royally.

What plans do you have coming up?

As Ironman 70.3 should take place in Egypt in 2021, I can only find myself very excited to join and challenge myself further in it. However, this time I intend on being more prepared.

I also see myself earning the certificate of technical diving by the age of 35 and am eager to experience diving in Mexico’s beautiful caves.

I find life worth exploring; there is always more to see and more to discover, and that’s what keeps me inspired to go beyond my comfort zone.