Home News Fel 3ezba – Will Take You Back to Nature in their Latest... 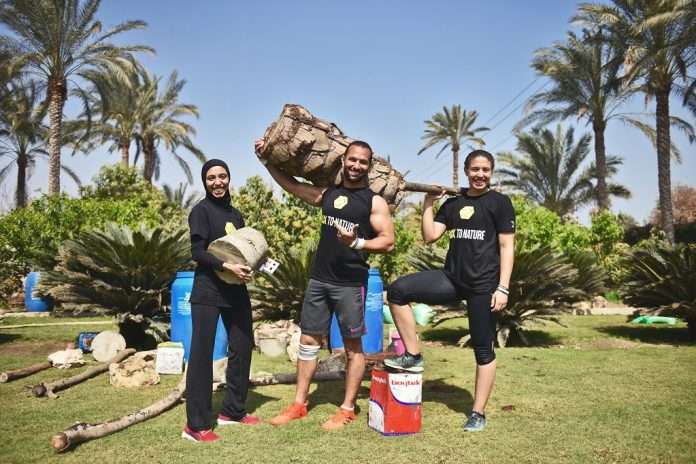 It all started 4 years ago when the Safwat brothers were huddled together, thinking of ways to take their beloved Monsters Team out of the city’s draining crowd and routine. They wanted to take them somewhere they could get back in touch with themselves and recharge, and they found no better way to do this than to take them “back to nature”. Little did they know, this was the very beginning of something huge.

They chose a location with lots of greenery and water, and decided to turn this trip into a little competition. They wanted to strengthen the bond between their team members and to boost their overall team spirit. During the competition, the team could only use things from nature, such as tree trunks or rocks, for tools. There were no judges and no strict rules; you finish fast, you win. The day turned out way better than expected, and the Safwat brothers thought “why not make this an event for everyone?” They started to expand gradually, taking each year’s feedback and building on it. In their second year, they went a little bit further, and they sent out invitations for selected people to bring their teams and take part in the competition. It was a huge success, and everyone who took part loved it. The third year was open for everyone with a limit on the number of teams. The feedback was amazing that year as well.  This year is Round 4 of Fel 3ezba, also open for everyone, and it’s now your turn to judge.

Each round Fel 3ezba is different in terms of games and challenges. The teams walk in not knowing what lies ahead; the only things they do know is that they need to work together as a team and that they need to use their heads as much as they use their muscles. Fel 3ezba believes so much in the power of the brain, given that it is the strongest muscle in the body. Usually, teams that depend solely on their physical abilities without so much regard to utilizing their brains don’t make it so far Fel 3ezba.

The main driver behind Fel 3ezba is their passion to provide the participants with the best experiences they could possibly have. Going back to nature, strengthening team bonds, achieving the body-mind balance, and overall having a good time are all guaranteed Fel 3ezba.

This year
Round 4
March 27th
Mansoureyya road
You just can’t miss out on it!

Check the event for more details