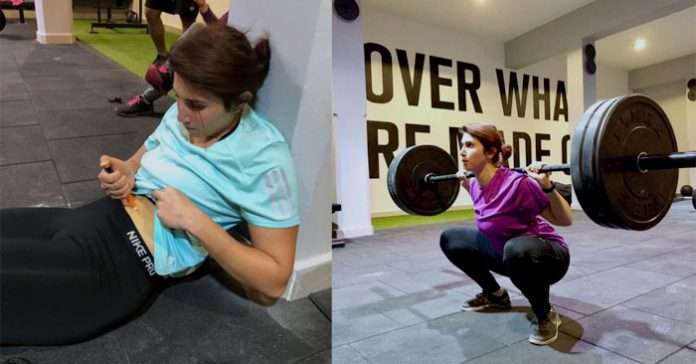 Lidia Mahmoud, a nutrition and CrossFit coach tells us a story, or more like a miracle that she has witnessed during a challenge she chose to tackle, she hopes this story reaches all those in need of assurance that what seems impossible, is rather just an overlooked obstacle. She tells us about her 2 and a half years long journey of fighting alongside a lady with diabetes ( Pixi) , a lady who has been awed by the results.

At the Gym, I usually gave tips and tricks as well as nutrition plans to the members for free. Pixi ( Passant Mourad), a  26 years old lady,  wanted a nutrition plan yet asked me that her request remains a secret. She usually approached me after everyone left. She called me once and told me hesitantly that she is diabetic, and said I am the first person to know besides her family. Pixi claimed that her family told her that she cannot let anyone know of this, because of the cultural beliefs that it might scare a potential  groom away, in fear that she could pass the genes on to the kids.

Pixi : “ My parents didn’t want me to get hurt from hearing the sympathetic, pitiful sentence, “Ya 7araaam 3ndha sokar” from my friends, or anyone else on the planet. They advised me not to tell anyone; not even my closest friends, my uncles, my aunts, or my cousins. If anyone found out on their own, I would defensively deny it. Doctors haven’t directed me very much, and all the hospital visits, high A1Cs, and comas made me feel guilty for all the candy I ate as a child. I believed it was my fault that my parents are worried sick.”

I started reading more about diabetes, I didn’t really know much, nor that there were two types, I & II. I took her case as a project. I figured that she follows an ill diet plan, and that the excessive insulin she takes, aids in fat storage, doing her more harm than good. Pixi became closer to me, and I was like her mentor, we started connecting more, through social media, on the phone, and through personal visits. We both took the decision that we will work on her case together, to figure it out and control it.

Pixi : “My coach Lidia is the one who led me through when I was desperate and hopeless. She studied about diabetes, collecting her information from doctors, and diabetic cross fitters, but what she passionately studied more, was me as a person, not as a diabetic.”

At first she was convinced that controlling diabetes is impossible as the blood sugar fluctuates throughout the day, and she’s mostly hypoglycemic at night, having lower sugar blood levels than normal. I convinced her we will work on it together until she agreed. We built a trust connection, and decided to target her mentality first, changing the thought that overcoming her case is impossible. I told Pixi there must be a reason as to why she has to face her situation, and most probably a reason she will never know, but as we get through it we might get a glimpse .

Pixi :” It’s easy to give someone a program to start working on, but it’s not easy to make them fall in love with the process and be consistent . Lidia knew how stubborn I can get sometimes, but also knew how vulnerable and weak I am because of my diabetes, so she began to study me and my emotions, understanding that I don’t like to feel weak, and off we took! “

I spent about 2 months to convince Pixi to be okay with letting others know she is diabetic. Pixi did indeed inform everyone on the group chat that she has diabetes, and she was rather confused with their reaction. She expected some sort of fear or unacceptance, but she was replied to by “so?”,  nobody really found a problem. Unexpectedly, Pixi lead the way for the group to share and speak of their struggles.

A month from that day, Pixi decided to post a Facebook status with the following “ I have diabetes.”, an action that has arose conflicts between her and her family. We have been through these obstacles together, we started working on nutrition and exercising. At first, Pixi was stubborn about her workout, she wasn’t a fan of weightlifting, but we got through that, eventually. The muscles building decreased  the deposition of the sugar in her organs, gradually decreasing her glucose readings from ones of a diabetic, to that of a prediabetic.

Pixi always measured her sugar in secret as she believed that it is inappropriate to measure her sugar and take her insulin shots in front of people; she usually used to go to the toilet to do that. After 1 year and a half of the journey, I convinced her to start measuring in front of people and  to take her shots normally. The  first time I advised  her, her reply was “NO WAYY” , I Told her you will have to do it one day, and she did. You will see her today carrying her kit in public, pricking her fingers, reading her numbers, and taking her insulin shots in front of everyone with no shame.

Pixi: “ On May 2017, I decided to tell everyone that I have diabetes, after 6 months working on my self-confidence. Then came the step of how to make my life easier with diabetes; Lidia  kept asking and searching about diabetes supplies especially for a device that won’t make me prick my finger each time I need to check my BG,  as my life style demands me to do so. “

Along the way I introduced her to “free style libre” sensor, which is a technology that very few know about. After explaining how the sensor works to her, she asked me, with tears in her eyes .. “ do you mean no more pricking my fingers” ? I  answered her “yes”. She wears the sensor today on her arm with confidence and when someone ask her what’s this ? She replies proudly “it’s a sugar monitor .. I am diabetic.”

Pixi: “ Lidia knew about the ‘Freestyle Libre’ and asked me about it, and without me knowing, she tried to get it for me. Unfortunately, it’s not available in Egypt, but she kept trying to get until we  fortunately managed to finally get one.”

Pixi never believed the outcome, we decreased the AC1s  to 6.3. The growth of muscles however was frowned upon by everyone, especially her parents, who practically banned her from training , not knowing what is physiologically happening within her. Pixi have had conflicts within herself too. She joined the gym for a month, with everyone suggesting she attends Zumba classes and other group programs most ladies take.

Pixi came back on track and has been going on perfectly with the program since last June. She is now lifting bizarrely heavy weights. She is at the the phase where fats are fainting and her body is toning. Pixi used to take about 30-40 units/ 5-6 units/meal of insulin at the beginning, takes 3 units/ day, which is the miracle we have reached.

Today, Pixi just eats her meals without pricking her fingers regularly. Pixi now is fully aware of the right nutrition plan for her, taking 3 units/ day, she still experiences hypoglycemia, which can only indicate that she can go without any insulin at all, thanks to the muscles fighting the sugar away.

Pixi : “on January 2019, we managed to get my A1C from 7.8 to 6.3, and from taking over 40 units of insulin to only 3 units per day! I know we are supposed to love our parents and siblings the most, but Lidia has a special part in my heart. She gave me life, literally. And made me believe in miracles again”