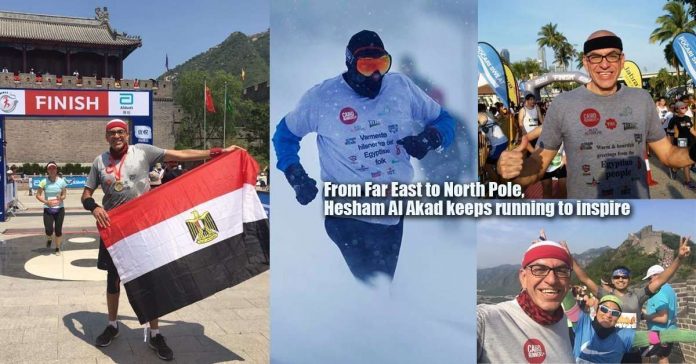 When you ask someone to introduce himself, he always mentions his academic degrees, job, and marital status. However, it was different with Hesham Al Akad, the managing director of Archi Caza, and mostly important the one of a kind runner and god father of sports who never misses a sporting event happening in town or abroad.

“The sustainable sports is better than cure”

This is how Al Akad introduced himself as this is his motto in life and the goal he’s dedicating his life to. Hesham Al Akad believes that people have to keep on practicing sports, not just for personal fitness but for the development of the whole society. He elaborated that if all people practiced sports in a developing country like ours where the medical services are modest this would, in turn, decrease the number of patients.

The journey from the very beginning

Al Akad started the running thing on 1983. He used to run 9 kilometers and quarter every day at the club’s track. Then some years ago, a friend told him about Cairo Runners. Hesham didn’t get interested at the beginning as the run was only 4 km, but he decided to try and see. 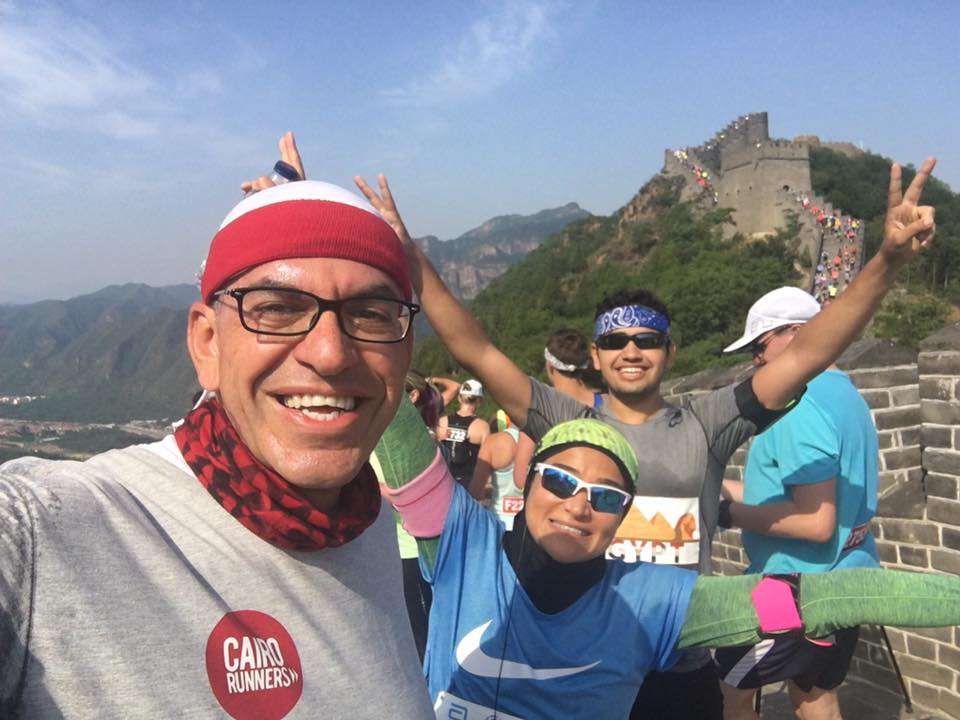 “It was one of the best experiences that I have ever had.” This is how Hesham referred to his first run with Cairo Runners. He added that because of them he felt that there is a big hope in this country as they are a group of youths who have an honest intention to spread sports and fitness. And thanks to them, many people got encouraged to run and many sub running groups were formed from their womb. That’s why he decided to support them with all what he can provide!

Run wherever you can 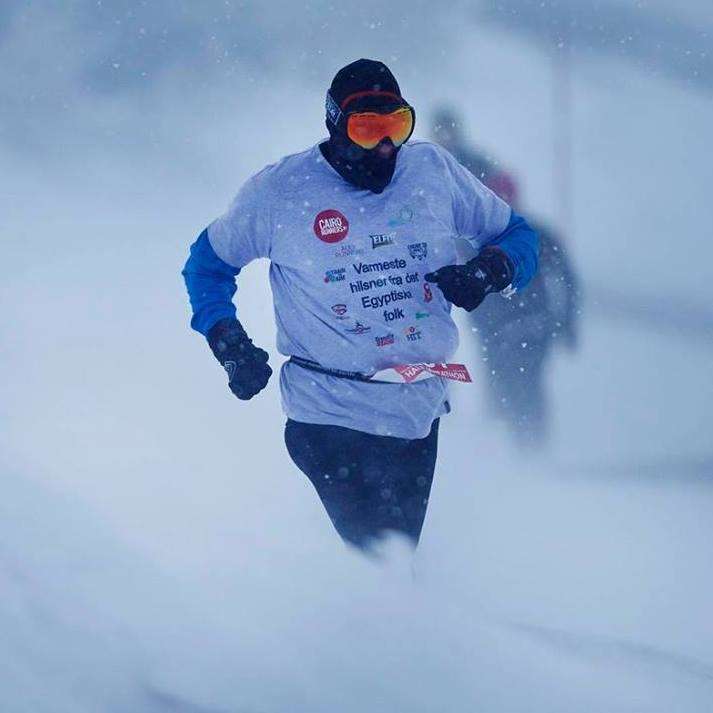 His passion to Cairo Runners encouraged him to participate in their full marathon at Lebanon where he and only 5 people managed to run the whole route. His presence was very important people were inspired the most when they saw a man in his fifties running among them. Runs dribbled in many places like Barcelona and Moscow and Hesham started to get bored and look for something different. That’s when the idea of running at the North Pole came!! 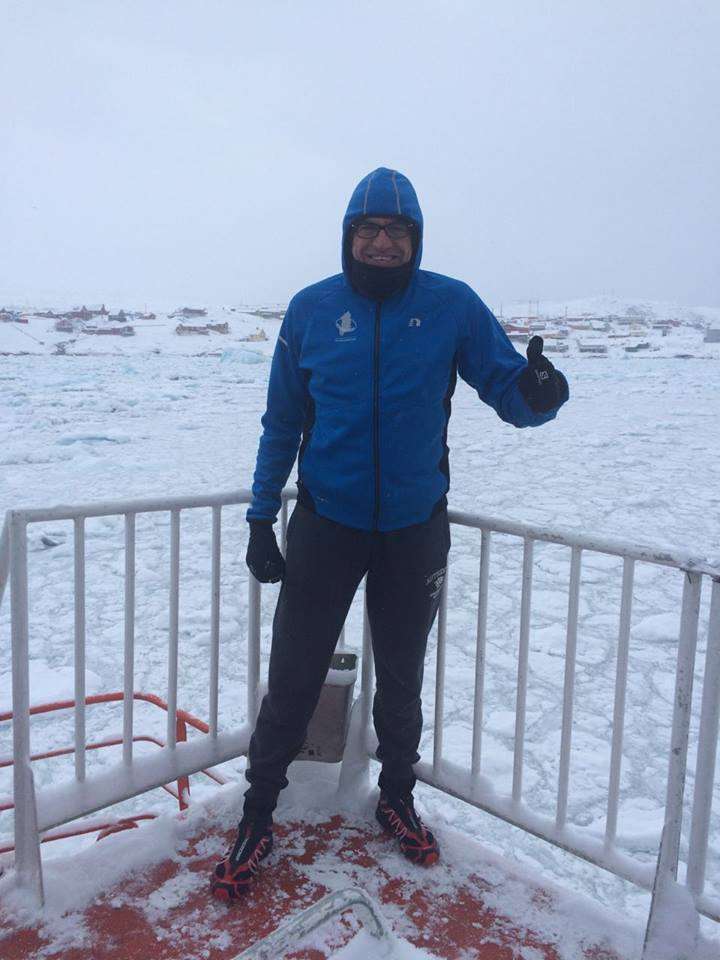 The difficulty and the issue that he will be the first Arab to join didn’t scare him. This might be the reason behind success that in most cases start with a crazy thought, along with good preparation. Hesham started searching for the appropriate clothes to wear and gathered some important tips. 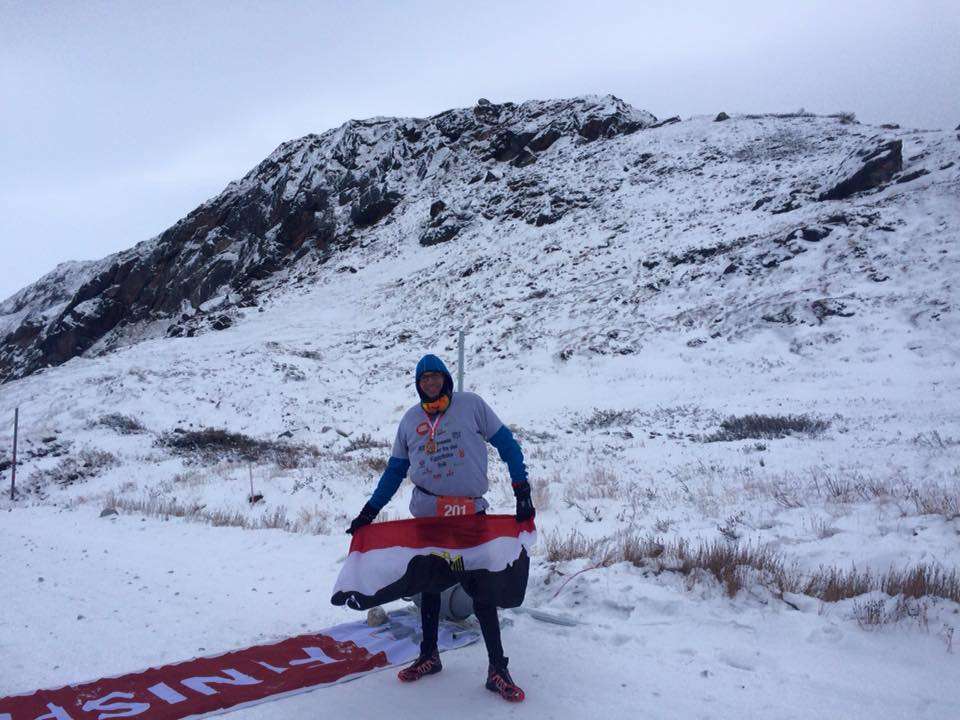 Wearing 5 upper layers and 3 lower, the temperature that reached -20 degrees with wind carrying snowflakes that hit the faces, and the unpaved route didn’t stop Hesham! The resistance of the air started to hinder running. However, Hesham’s resistance was a way stronger and motivational to continue and complete the half marathon! No doubt that such a challenging new experience was amazing for Al Akad not only for the personal challenge and pride. But also because he has a goal of honoring Egypt internationally and he believes that running abroad with a T-shirt written on it the name of Egypt can do a lot and can contribute to the revival of tourism. 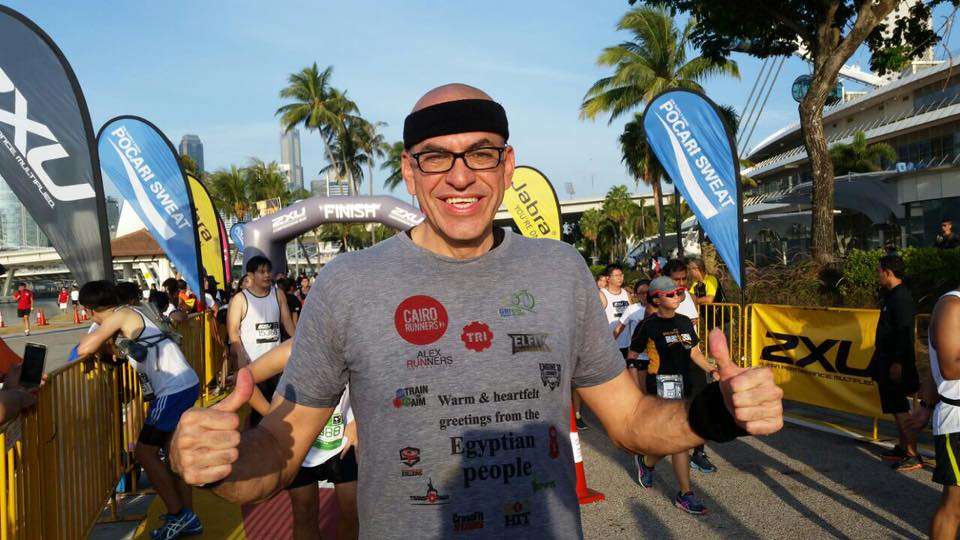 Then from extreme cold to extreme heat, Al Akad participated in the half marathon of Singapore. Humidity and very high temperature weren’t less difficult than the freezing weather at North Pole. When Al Akad told us how he was like someone coming out of the shower and how some people fainted, we felt that there is a magical power made of belief and enthusiasm dominates him during running that makes him bear all the obstacles and besides talk about the beautiful scenery he passed by while running in such hard conditions. No wonder then when you know that he ran around one of the 7 wonder of the world, The Great Wall of China! 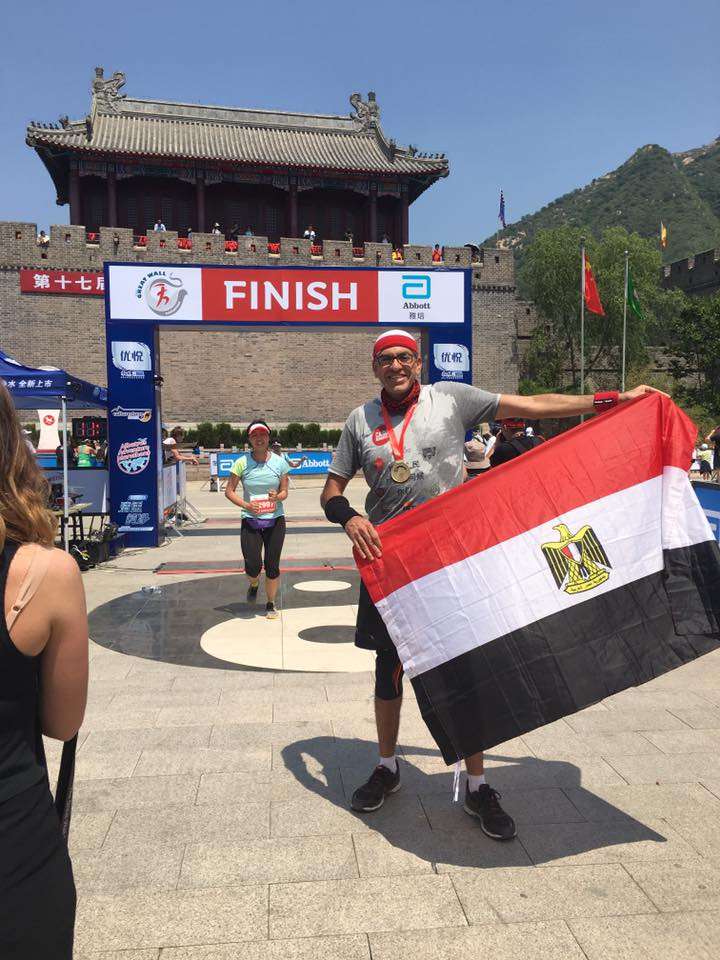 It wasn’t just about the high temperature that time, but the run itself. The first 5 kilometers were ramps and stairs. Hesham and his companions decided not to stop during them to keep on their energy. Finally, he was able to complete the half marathon route. 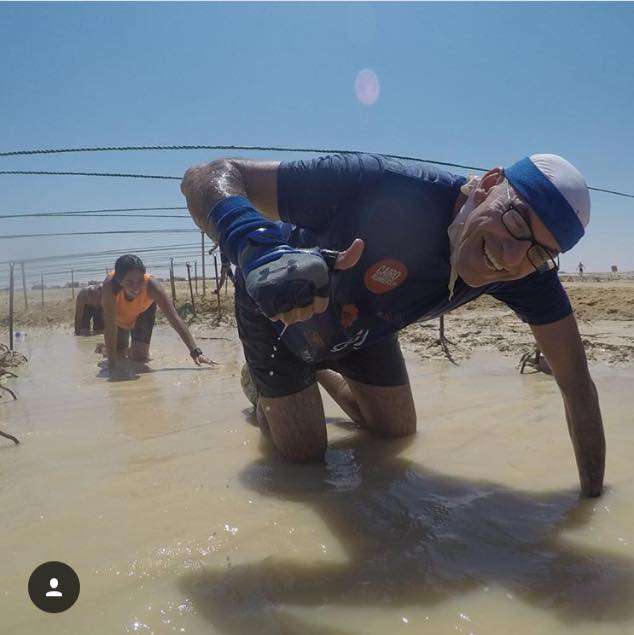 This is Al Akad’s main goal in life, he doesn’t like the idea that all friends around him talking about high blood pressure and diabetes. Moreover, he is taking the responsibility of inspiring youths to practice sports. This is the main reason behind the many events he joins and also his participation in Qomrah TV show because he believes in leading by example even with his sons. Hesham has 2 teens who he said that their main focus is “formet el sa7el”. He found that the best way to change this is when they see what he does not just by theoretical pieces of advice.

Respecting your youth leads to running when you are grey haired 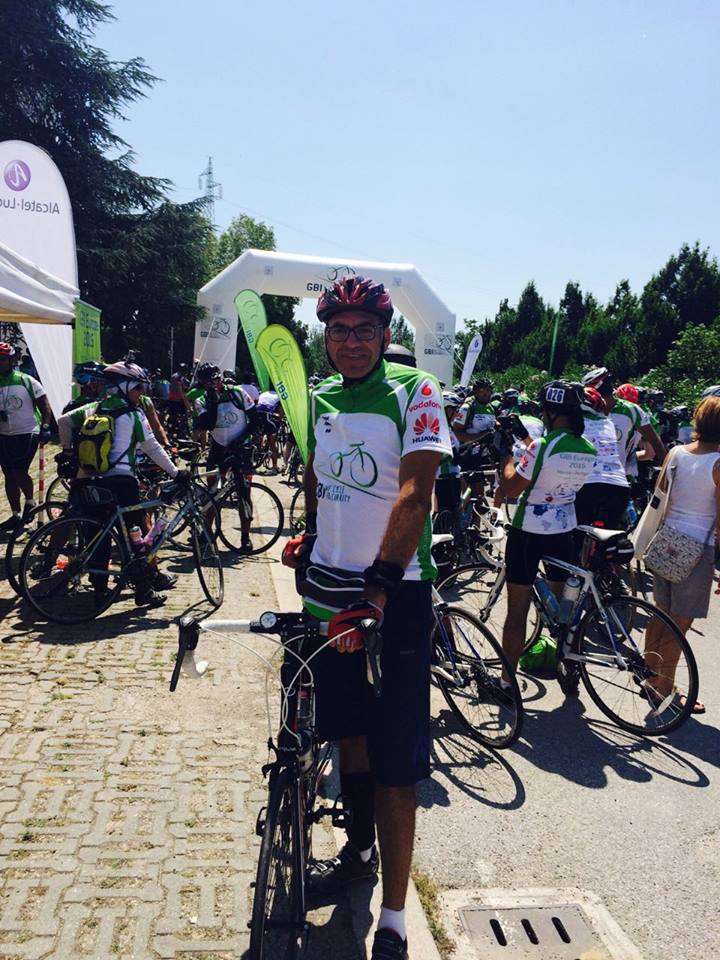 At the end, Hesham’s important tip to youths was not to get fascinated by all the temptations around that make them affect their health and to preserve their health to stay in a good condition for them. He added that this was one of the reasons behind his ability to continue even after the 50s and despite some health issues that normally come with age not only with running, but also cycling and crossfit.