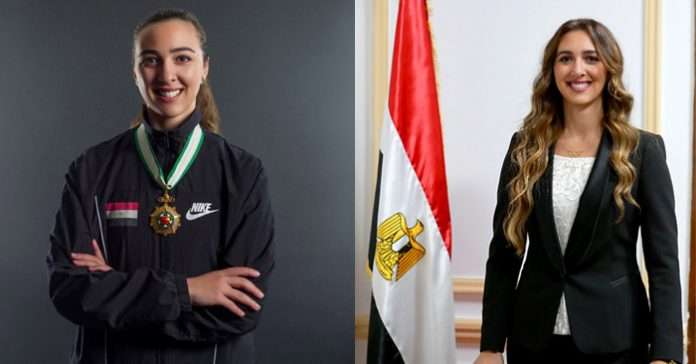 Hadia Hosny, ambassador of the International Badminton Federation, and Member of the Parliament, and other presidential and nonpresidential programs has set the bar so up high for women and girls, both in Egypt, and abroad!

Hadia is a graduate of Bachelor of Pharmacy, Ain Shams University, and a Master degree holder, The University of Bath, England, 2012. Hadia became an assistant Lecturer of Pharmacology at the College of Pharmacy, British University in Cairo, while doing her PhD at Cairo University.

Hadia is a Member of the Presidential Program for Leadership Development, and a member of the Coordination of Youth for Parties and Politicians. She received the Order of the Republic from the first class in sports in 2019 for the gold medal she attained in the African Games!

“Hadia was the first Egyptian, Arab and African female athlete to participate in the 2 Olympiads in Beijing 2008 and London 2012.”

Hadia became a trainer of the Egyptian Special Olympics World Games and the first professional Egyptian player in the English and French League. She attained an honorary doctorate in peace and sports, and held workshops to teach badminton for girls in Africa in Côte d’Ivoire.

Hadia Hosni Academy was established in 2013 to prepare Olympic champions and give them full support and experiences. “I commissioned the organization of a camp and training for the African champions to help them qualify for the Olympiad 2020 in 2016.”

Hadia was chosen as the ambassador of the International Badminton Federation in the Peace and Sports Cup for Girls, as well as the representative of women in Africa at the annual general assembly of the International Federation in India. She Contributed to the establishment of Parabadminton in Egypt. Hadia is also the Egyptian Special Olympics coach at the World Games Abu Dhabi 2019, winning 6 medals, 3 gold, 2 silver and one bronze!