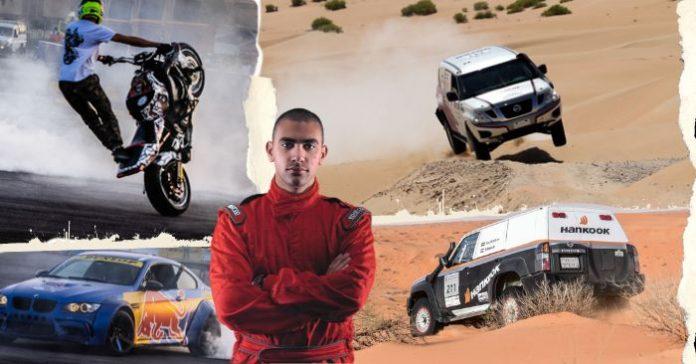 Kick-starting his career as a volunteer in 2006-2007, Hakam began partaking in race organizations before joining a rally school in 2008, based in the Automobile and Touring Club of Egypt, one of the oldest and most prominent clubs globally.

In 2009, Hakam was the youngest Egyptian co-pilot, rivaling in local Egyptian championships of cross-country rallies. Empowering his early breakthrough and his shining potential was his race organizing activities that enriched him with knowledge and exposure.

Diligent and persistent in his work, Hakam gained multiple certificates between 2012 and 2015 by the Fédération Internationale de l’Automobile (FIA), being certified in the end as a race director. He began participating in the organization of the Red Bull Car Park Drift event, gradually ascending the steps, engaging on a streak of gaining certificates till he rose to the race director, being the youngest Egyptian to attain such a position, only in his twenties. Such significant progress didn`t stop him from roaming the race tracks.

In 2014, along with his Egyptian team, Hakam competed in the fast-forward race in the famous event of Rallye des Pharaons, a 3,100 km rally-raid race that starts and finishes at the foot of the Giza Pyramids. Hakam`s team aced the race, scoring the third rank worldwide in their race category: Production Cars category.

In 2016, Hakam was the only Egyptian to make it outside of Egypt, inscribing his name among the members of an international team by joining Qatar`s National team, being a co-driver alongside the driver Adel Abdallah. “I thought there were no more opportunities for me. I couldn`t find opportunities in Egypt,” said Hakam. “Then, an opportunity in Qatar`s team was cradled. It was my door to international rivaling.” In the Abu Dhabi rally, Hakam secured the 4th rank worldwide, keeping his tires blazing in the lead for several months. In 2017-2019, he moved to the Hankook team in Saudi Arabia.

Not letting the reins of race organization down, Hakam founded his own enterprise Maverix in 2015, an eminent Egyptian company, primarily responsible for three categories: important race management: Red Bull Car Park Drift, motor festivals, drift races, and rally races, running test drives for significant car brands as Kia, Renault, Nissan, BMW, and more, and concert and crowd management. It was the first of its kind to introduce such offered services to Egypt. Last year, Maverix expanded its activity to include other sports such as hiking, marathons, and triathlons, partnering with star-shining event organizers such as The Trifactory and Iron Man where it was responsible for medical and health operations and crowd management. “One of the most challenging events was the motor festival that took place in Sahl Hasheesh in 2018, the first multiple-racing event to happen in Egypt where four races ran parallel. It abounded with multiple troubles. Working mindfully on them, we were able to unknot the troubles, organizing the first of its kind festival.”

When asked about the most important lesson, Hakam replied: “Work slowly, but surely. Everything will come when you are prepared. You must improve yourself and aim beyond your position, otherwise, you will remain unmoving in your place and swabbed off the arena.” When asked about what would he advise people, he said: “My advice to people: follow your passion, keep learning, and go after what you relish, and not what dazzles the eyes. Study, test, and assess your passions, learning what you want and drawing experience from the journey. Don`t enforce the goals, rather move slowly and relish the process.”

Sarah Sadek, a rising star in the world of kitesurfing

Zeina El-Alamy, A Rising Star in The World Of Volleyball