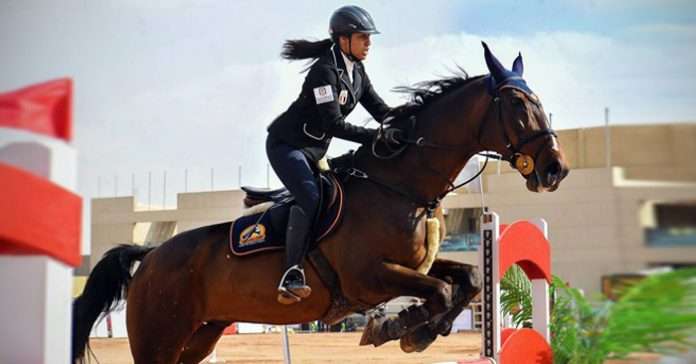 Haydy Adel Morsy is an Olympian and world champion who currently studies marketing at the AUC. Haydy coincidentally found out about pentathlons in 2010 and immediately joined their training. Modern Pentathlon is an Olympic sport that comprises five different events: fencing, freestyle swimming, equestrian show jumping, and a final combined event of pistol shooting and cross country running. Haydy quickly hopped on the national pentathlon team and started competing professionally. To improve her fencing skills, she started taking extra fencing training but ended up being so good at it that she joined the fencing team as well. Today, the 21-year-old champion is a member of both Modern Pentathlon and Fencing national teams. Haydy’s record is studded with so many gold, international accomplishments, and recognitions.

What keeps you inspired?

“I still have so much that I still need to accomplish, targets I have set for myself that I’m not planning on giving up. I do not want to quit before having won an Olympic medal, and to do that, I need to put in my best effort. If I had to send a message to everyone out there, I would tell them never to give up. Set your goals and don’t stop until you reach them. Victory tastes so much better when you fight for it.”

Best of luck Haydy and thank you for always leaving us proud!