Home Women Hers celebrated her 4th anniversary from east to west 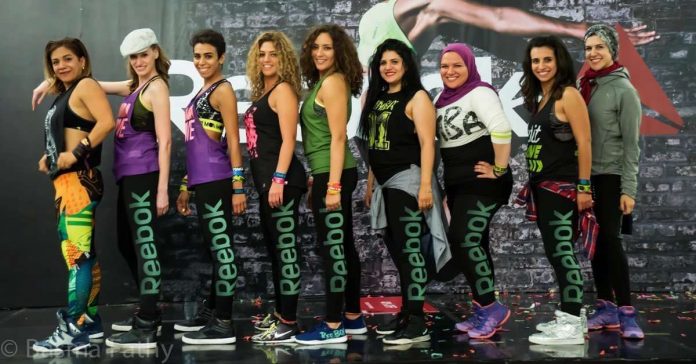 Last Saturday, the 21st of May, Hers turned 4 and celebrated her annual ceremony “Rise” at Royal Maxim Palace Kempinski Cairo. The moment we stepped into the event, we felt that it is for every woman, and not only for a specific class as the attendees varied from students to old ladies. There were many women bringing their little ones because there was a convenient fun kids’ area from Leap Egypt.  Many veiled girls came too because all the classes took place in closed halls with no cameras. Photographers were permitted to take photos or videos for the instructors only if they are not veiled.

The good thing that the separators between the 3 halls were open making it easier to move from one class to another without having to go outside which was easier for veiled ladies.

We started with Power Yoga class. It was not only about meditation, the class included challenging workouts that called for the fit person inside.

Some classes were run by Les Mills, the first was Body Pump that included weight lifting. There were different weights, so you choose the one that you can endure. 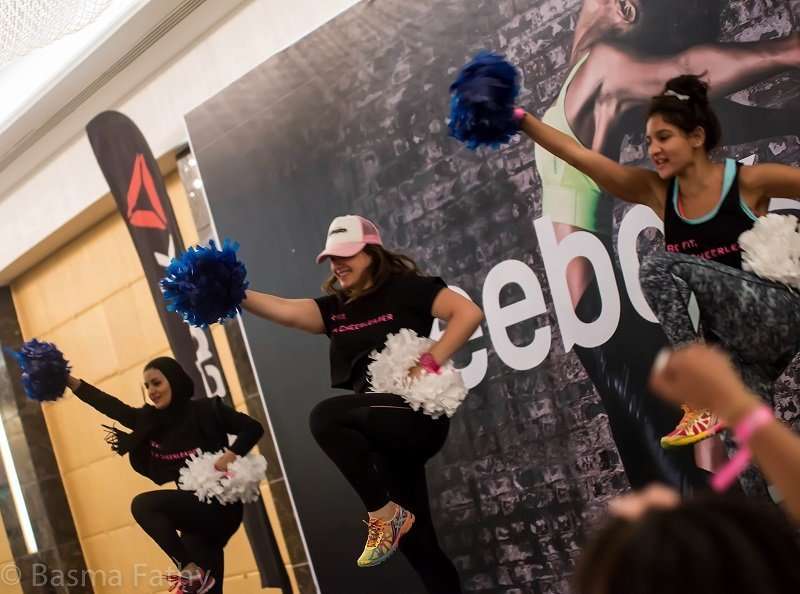 Getting ready for receiving Gina Grant at the Indoor Cycling class, some Egyptian instructors started warming up. The most important thing in that class was the ability to maintain BALANCE! Gina started slowly asking us to take it easy if there a certain move we couldn’t manage to do. But, after a while we stood on the pedals.

Returning to Les Mills, we attended the Body Step class. It was like going down and upstairs. However, Body Step didn’t neglect exercising the upper body with some burpees and push-ups.

In need of refueling our energy, we started Zumba. Zumba classes all over the day were the biggest in number; they were a filling combo of mood lifting, music enjoyment, and calorie burning with Heba Khalil, Jessie ElBaz, and Ola El Abany. 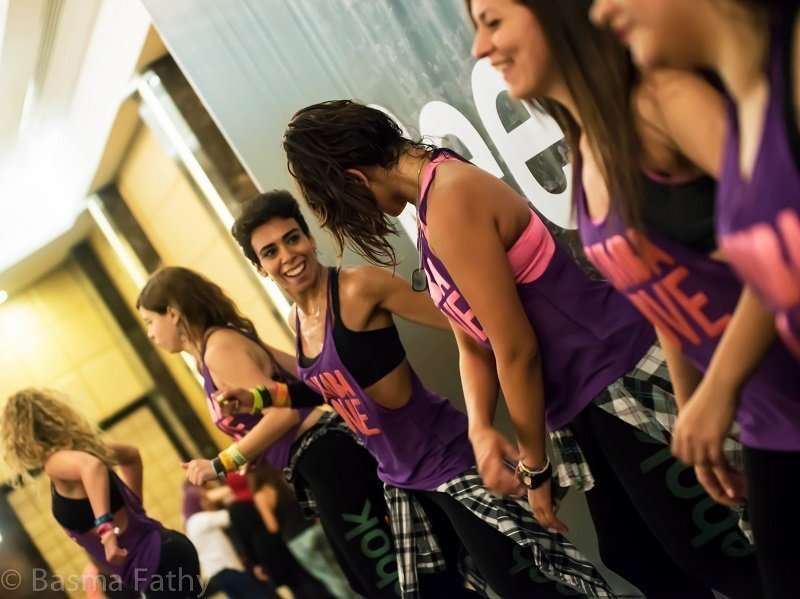 Cheerobics with Cheerobics Egypt! We can tell we have never tried such AMAZING thing! The fun released from exercising with the cheering pompoms was one of a kind. Our bodies were shaking and our spirits as well. During the class, you can easily forget that you’re doing a workout as it is coated with entertainment. However, Cheerobics is not just a fun workout; it’s a challenging one that needs a move from each part of your body.

Then came the Body Jam and Body Attack. The distinguished thing about them was that they combined a lot of workouts together. Moreover, if your main target is burning calories with music hype, then they have to be one of your choices.

The Rise to the challenge fitness competition 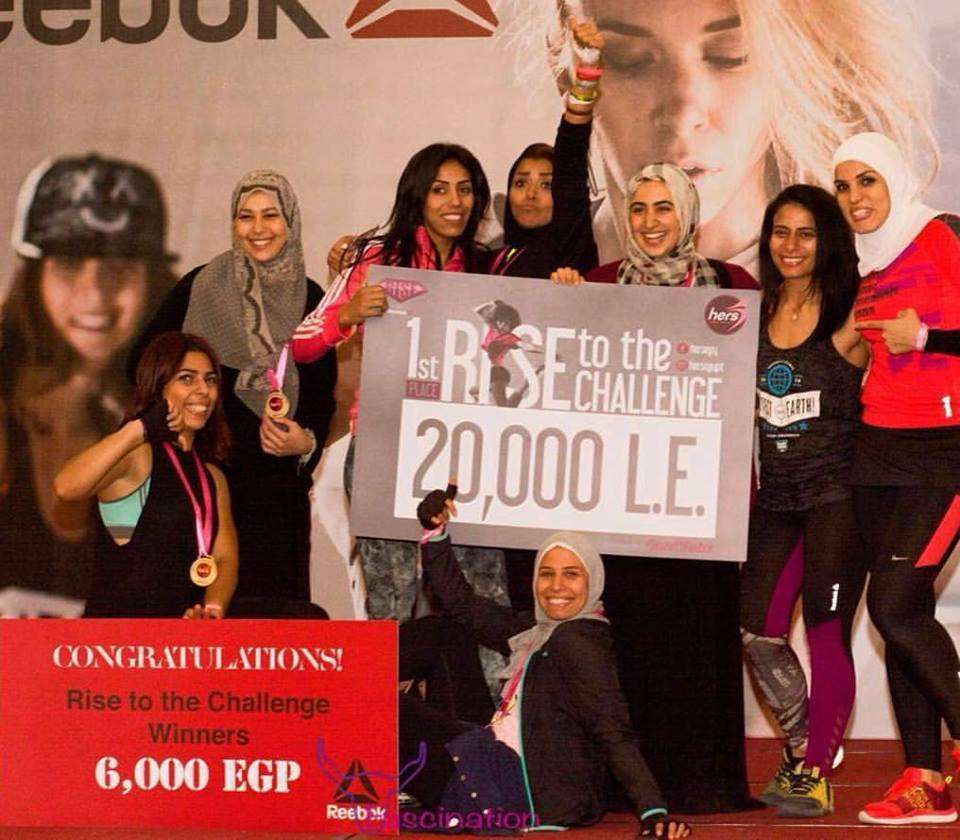 The day became hotter with the competition hosted by the inspiring Nirvana! 14 teams each headed by one fitness instructor were competing on the first place. The competition included out of the box fitness challenges with traffic cones and car tires. Most of the contestants agreed that the competition released their positive energy. Team Toqa Salah finally succeeded to make it and won the grand prize, 20 K Egyptian pounds, as well as 6 K that was introduced form Reebok, the main sponsor.

The bazaar, yummy foods, and beverages 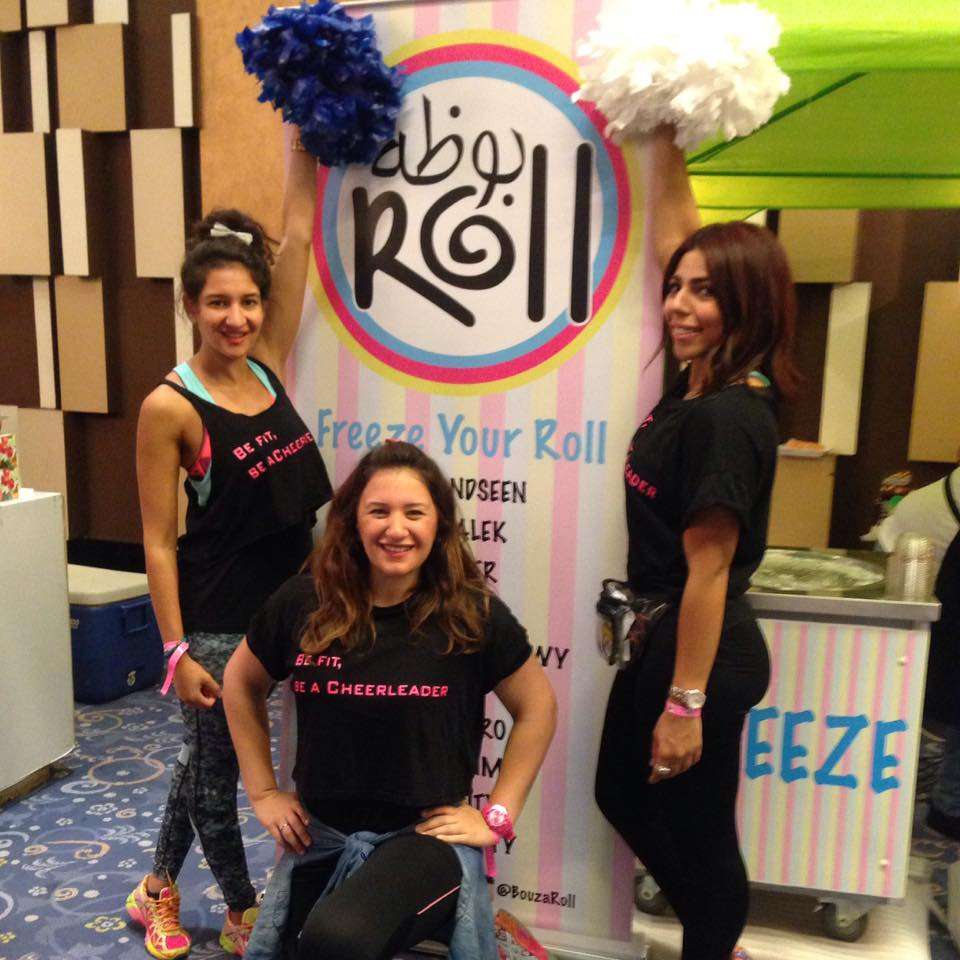 Being keen on a complete healthy day, we found KCal and Raw Republic. For the dessert, there was also the low fat ice cream rolls from Bouza Rolls. 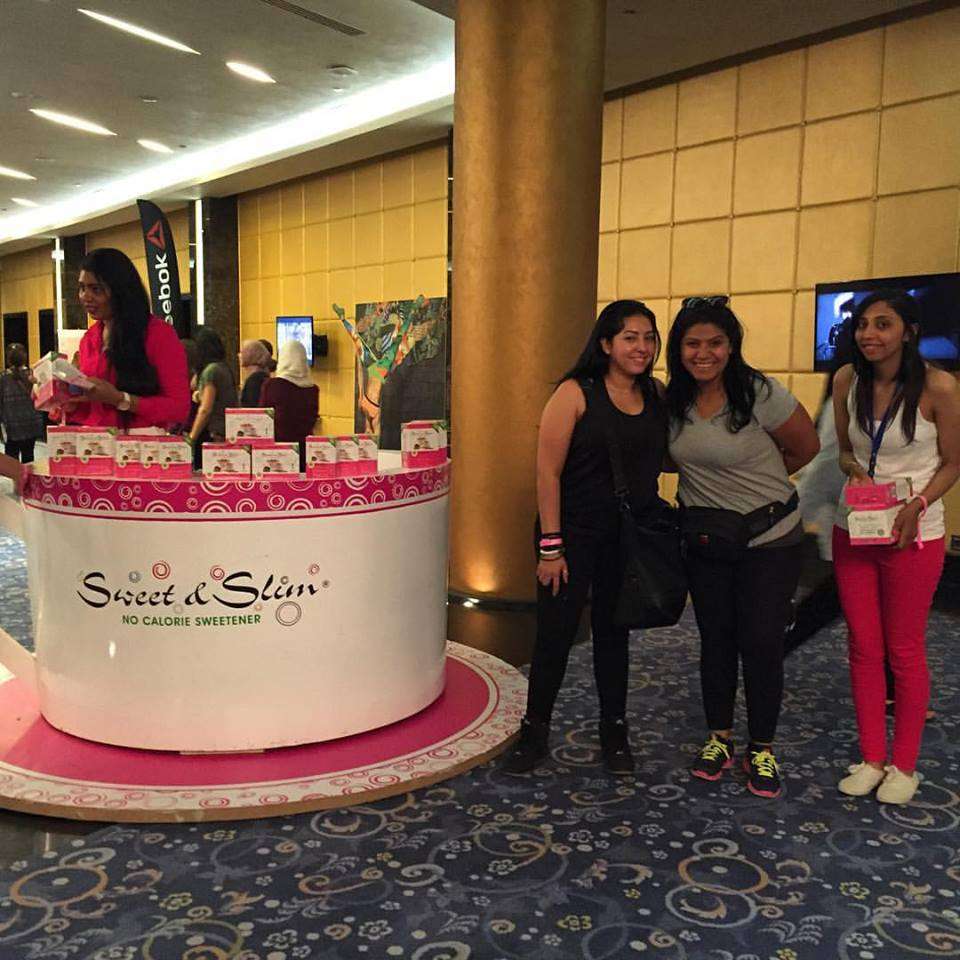 In addition, there was a 3D puzzle that people were challenged to make and win Reebok new disrupt leggings.

It wasn’t just a safe convenient place, but kids also did gymnastics and hip hop. There were also hands and crafts, board games, and cooking activities. 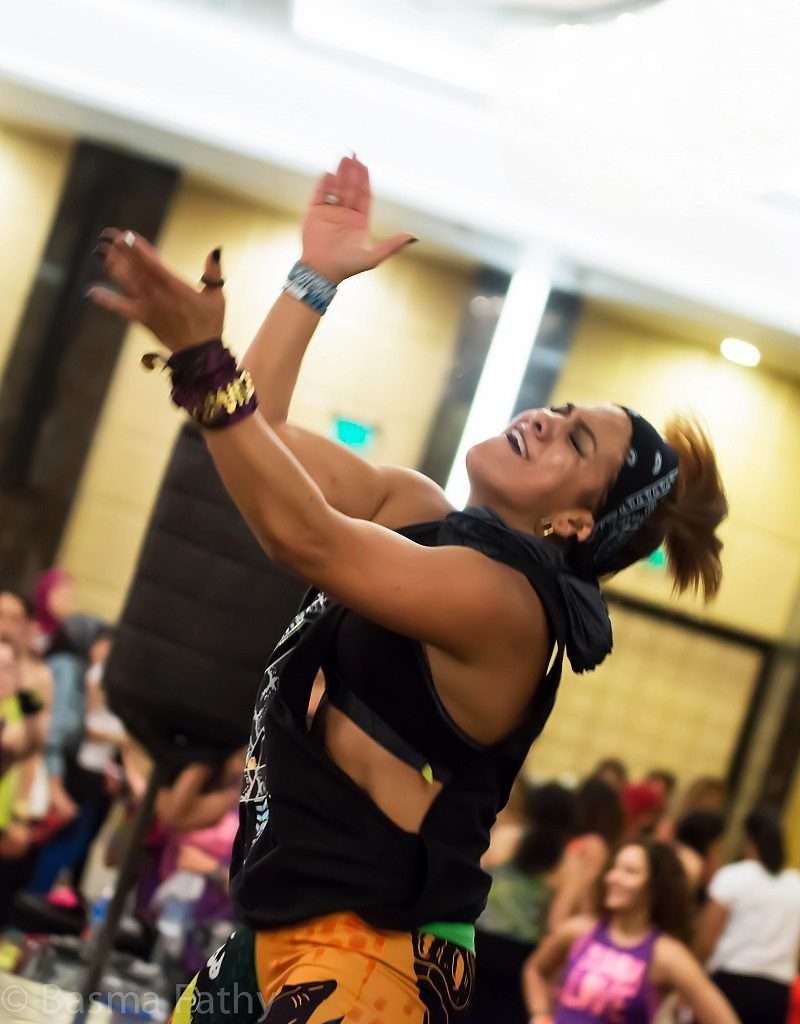 Finally after an eager wait, the Zumba mama, Jessy Larsen came. Jessy didn’t only bring zumba all that way from the US, but she also brought the Latin atmosphere. The real challenge was whether we would be able to catch each move before Jessy turns to another one or not.

The enjoyment of Jessy’s class didn’t make us forget to have some time at the jumping one with Jumping Fitness. Never think of it as an easy one. It’s a real challenging exciting one which made women wait for a vacant trampoline so they can jump high!

“So you think you can dance baladi?” 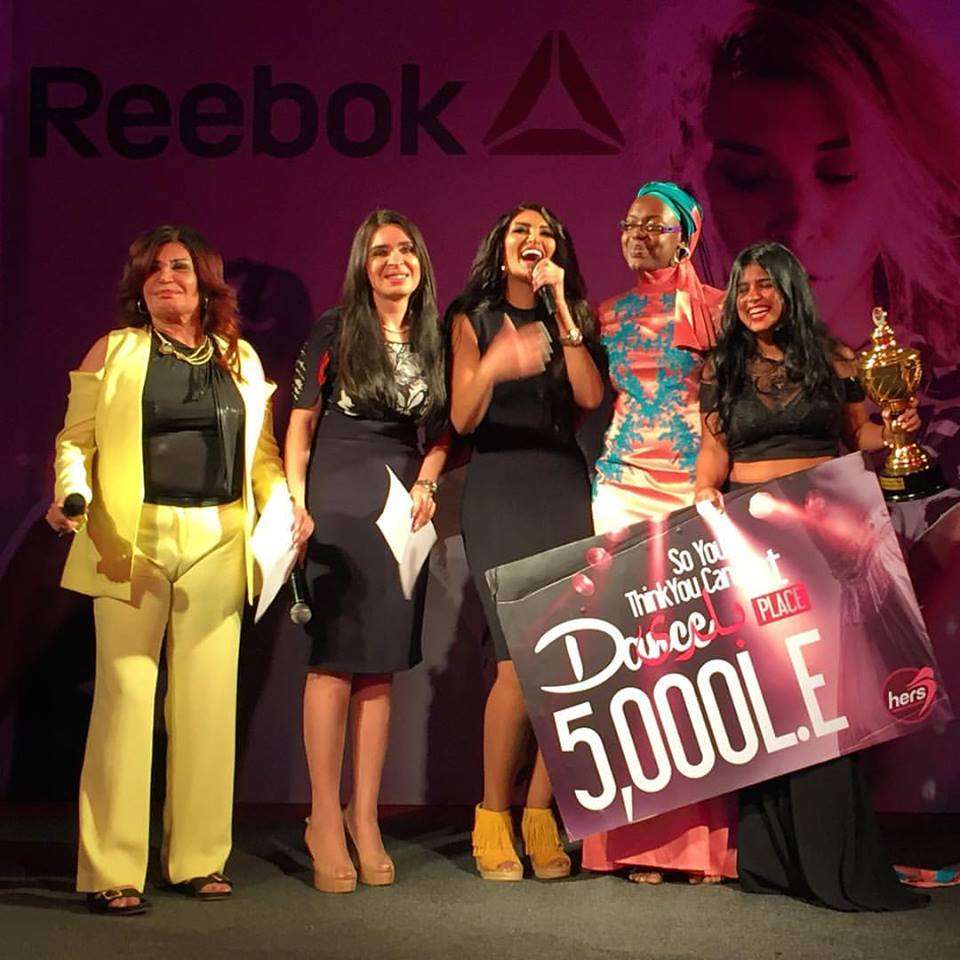 It’s not a question, it was a competition hosted by the wild Sally Abdel Salam and judged by the 2 dancing icons Nagwa Fouad and Dina. 11 contestants and 4 groups representing Hers 4 branches presented amazing performances accompanied by eastern and western tunes. Nothing was more rewarding after all the efforts exerted than Dina’s words when she said that this was the first time for her to judge a national dancing competition and she saw contestants who trained by hard and left no room for joking. At the end, the 2 judges announced the 3 top winners who received 5 K, 3 K, and 1 K Egyptian pounds, successively. The show and the day ended perfectly with a dance from Dina!

We spent an extraordinary day having the chance to try a variety of fitness classes with professional popular trainers in a private convenient atmosphere. Mostly important, we released our negative energy. We wish Hers a happy 4th anniversary and more ones yet to come so they can keep on surprising us and help women of Egypt to RISE!

12 New Hustling and Empowering Moms to follow this March!