Home Tips and Advice How alcohol slows down your fat loss 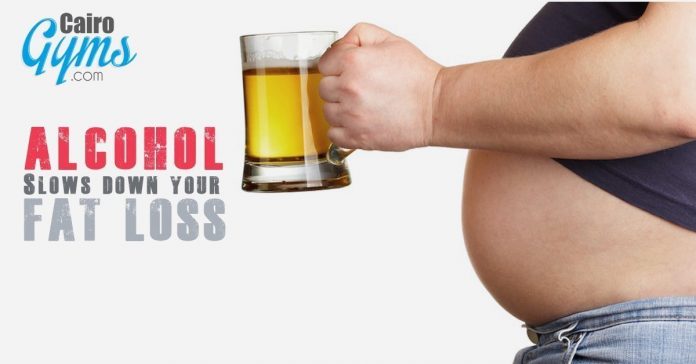 Alcohol for some people works as a partner in most of their social events, and a feel good drug when things aren’t going so well, and as we all know that alcohol consumption with mass levels can cause you stomach, kidneys and liver disease, which can lead to serious health problems  even death in certain instances. However we’re not talking about the complications that are resulted from consuming alcoholic drinks. We are stating one effect that is not known by many which is the consumption of alcohol leads to hindering fat loss.

Alcohol has been referred to by nutritionists as what’s called empty calories.

When you drink, the first thing your body burns is alcohol. Your body won’t burn fat then but this doesn’t mean that you will not lose weight; it only postpones the process of weight loss, since the alcohol does not store as glycogen, and you immediately go back into ketosis/lipolysis after the alcohol is used up.

The main reasons that may concern those who really want to shed unwanted fat are:

When fat has nine calories per gram, alcohol has seven which is only two calories less. Bearing in mind that it lacks all the nutrients needed for a healthy metabolism.

Owing to the sedating influence that results from drinking alcohol, people who drink might not pay attention to neither the number of drinks they are having nor the kinds of food they are eating. The overall result is added body fat.

Testosterone which works as a powerful agent in the process of losing fat is lowered by the action of consuming alcoholic drinks. Knowing that testosterone as an anabolic hormone, contributes to gains in lean muscle mass. Therefore lowered testosterone means fewer muscle gains, and less muscle means a lowered metabolic rate.

Alcohol can increase appetite, making the combination of alcohol and a fattening meal a disaster if you are following a diet plan and trying to lose some weight. Studies have shown that alcohol consumed before a meal increased caloric intake to a far greater extent than did a carbohydrate drink.