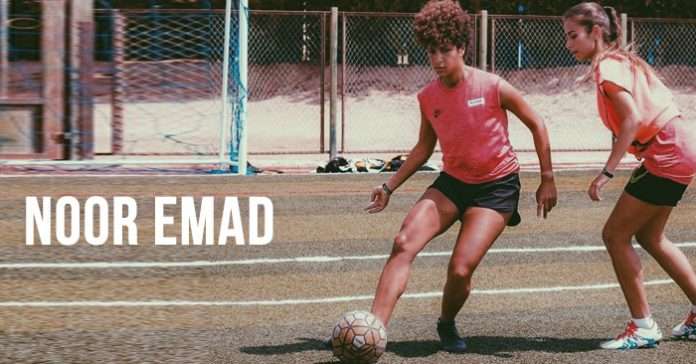 Noor has always had an indescribable passion for all types of sports. So far, she has trained gymnastics, danced ballet, and shot for basketball at a young age. Her love for football was taken very bizarrely for a young girl who attended a girls-only school. While she began to train football,  she occasionally played with her father and older brother for fun. At that time, Noor didn’t find any football clubs or academies for girls. She joined all school football tournaments she could, until she finally started training at Arsenal Wadi Degla Academy at Wadi Degla Sporting Club.

Noor then joined the GUC football team in her first year of college. Two years later, she became the team captain, a title and responsibility she earned and was up for! She kept training at the GUC team throughout her 5 years of studying. In the meantime, Noor and her team managed to open an Academy to make training easier and throughout the whole year! The Academy went on with the same coach, the same team members, and an expanding room for more girls to join the group. The football academy kept on growing bigger and livelier.

One year later, it became full house! The academy housed a full team of 11 girls, ready to compete. The team joined both the Egyptian Cup and the Egyptian National League. Noor was still named captain for 3 more fruitful years. When Noor headed to Berlin for her university’s semester abroad program, she  trained football there well at Berliner TSC E.V..  She returned back to her team in 2018 and kept on playing with it for two more years. Noor now had the chance to join a new team that is participating in the National League. First year of college marked the beginning of her fitness journey.

Noor used to train Cross-fit in 2014 at Cross-fit Stars before moving to FitsSquad. She got very attached to the fitness workouts and to the place. After undergoing a lot of studies, trainings, trials and errors, and attending so many different workshops,  Noor started coaching Grind and fundamentals sessions at Fitsquad (2017-2019).

After her Berlin trip, Noor trained Calisthenics at Bar Brothers, she got more into bodyweight training and calisthenics. She invested a lot of time and effort trying to learn more, and understand the art form of using her own bodyweight as a mean to maximize her own human power and athletic ability. Calisthenics is designed to improve strength, flexibility, agility, balance, coordination, and aerobic conditioning. She dug deeper and deeper into Bodyweight training. Parallel to Calisthenics, she started to Coach at AquaFit Egypt in 2018/2019. And finally, by the end of 2019 (till today) you can catch Noor in her natural habitat, a passionate bodyweight trainer, an awesome fitness Coach and a considerate personal trainer at Brass Monkeys Studios.

For Noor, It’s all about taking steps, no matter how slow or small, as long as they are forward.  These baby steps, later make up a giant leap that leads right to your fully deserved goal!

Never stop chasing your goals, and never fall into the pit of comparing yourself to others. It’s YOU today vs YOU yesterday. Start now, seek it, and fight for it. Nothing is easy, and nothing is impossible. It’s all about being passionate, having faith, patience and being genuinely committed!