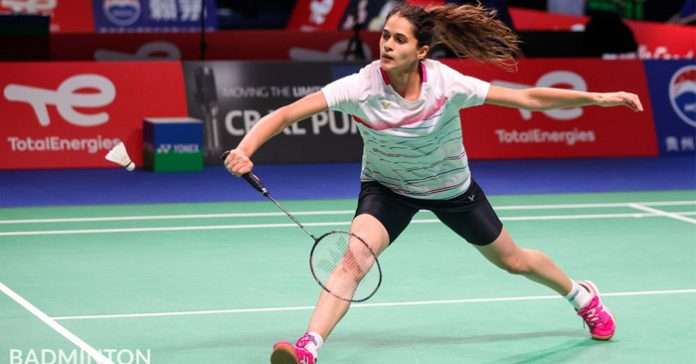 Nour Youssri (18), Heliolido club’s badminton player, started her badminton journey when she was 7, transitioning from ballet and swimming. The story started one day, which turned to be day 1. Nour joined her friends for their regular badminton practice.” I instantly loved the game, and when I went back home, I told my parents how I eagerly wanted to continue badminton and quit both swimming and ballet. My parents also used to play sports before, mom played basketball, and my dad was into volleyball. They we so supportive, as well as my relatives and friends.”

“I joined my first championship when I was 8, I lost hard, but I was so excited and impressed by the competition. I realized I was so competitive, so I desired and planned to train harder. In the following championship, I came in 5th in Egypt under 11, and the same championship after, I ranked 1st in Egypt, I was 10 at that time. From that point, badminton became a serious part of my life, and I commitment I cherish. In a short time, I ranked 1st in multiple national championships under 11, 13, 15, 17 and 19!”

“My first international championship (Ivory coast international U19) was when I was 14, I ranked 3rd place! After that, I played in all Africa championship under 15, and we won 1st place in team event, 3rd place in women single, and 3rd place in women double. From there, I entered and became part of the national team under 19, and I participated in the African games, where we won second place in the team event. I lost in the individual event women single, it was a really tough and depressing time, but with my family’s support, I trained harder and came back even stronger.”

Champion in the making

“When I came back from the previous competition, I had to participate in national championship under 17, and I joined in both the under 17 and Senior championship, where I was the youngest team-player, I was only 15. I ranked 1st in both and that was a really great and motivational achievement for me! All the hard work was paying off!”. Nour became part of the national team for seniors since then, and she participated with them in the African championship in Nigeria, followed by the African games for seniors where they ranked 3rd in both team events. “I reached the quarter final in women single, and I played against Africa’s senior ranked first player. It was a great match full of adrenaline and definitely lessons and an experience to learn from!”

Nour played in the Mediterranean Sea Championship under 19, and she won 3rd place in single, 2nd in double, mixed and team. “It was my first international championship to achieve 4 medals, and it was a momentous experience to me!” Nour then played in National for seniors, where she gloriously ranked 1st place for the second time, that was a great drive and motivation for her to keep going and get super ready for the all Africa U19 Championship!

The Road to The Uber Cup- Sudirman Cup

“In 2020, I joined the seniors for the African championship to qualify to the world championship Uber Cup, and we thankfully attained first place in team event, and I reached the quarter final in women singles! It was an astounding ticket that got us qualified to the world cup/championship, and also to Sudirman Cup.” I always used to watch these championships on YouTube, and now I got to join my role models, and even play against them! It’s beyond wonderful!”

“In 2021, I played in the All-Africa Junior Championship under 19 and I’ve been training for so many years for this competition, I won first place in women single, which was a dream come true, and 2nd in women and mixed doubles, and team events. That was an astounding step and milestone for me, and it helped me get close to my goals and motivated me to train even harder for The African championship for senior and world championships.”

The highlight of 2021! It’s the first time in history of Egypt to qualify to it. First Sudirman cup World mixed team championship. “We had the chance to play against Japan, Malaysia and England! They were really great matches and experiences!  Unfortunately, we didn’t win but it was a huge step for me to keep moving forward and never give up on my dream. It was my first time seeing these high levels and competing with them, it’s really different from Africa.

We then played in the Uber cup; it was like Sudirman cup but it’s a world championship for women only. I played many matches. The historical event made in this championship is that we won against Tahiti 5/0 and it’s the first time in Egypt and Africa to win a match in Uber cup. We also played against China, Taipei, and Korea. We did not win, yet we performed our best, and winning against Tahiti gave us hope that one day we can win against Asian teams. It required a lot of hard work and camps to prepare, but after traveling to these 2 world championships I told myself that nothing is impossible, and I told my younger version of that she’s doing a really great job and that she will keep moving forward!

The last championship we are currently playing is All Africa Championship for seniors. I hope that we can attain the gold medal in team event, and in the individuals too! Wish us plenty of luck!

“My family has been a great deal of support, they helped me immensely in balancing my studies and my athletic life. My greatest role model, is my coach Abdelrahman Kashkal, he has been coaching me since I was 7, he always believed in me. I owe a lot to my colleagues and friends too! My mental health coaches helped me so much to become mentally prepared in the field. Hadia Hosny is my role model in Egypt. I’m so grateful to get the chance to play with her in the National team. Internationally I love Carolina Marin because she was the first European to get Olympic gold medal and win against all Asian players. She did create unforgettable history that motivates me and reminds me that nothing is impossible. She is so competitive and a fierce fighter.”

“To complete my story, I yearn and plan to win a gold Olympic medal and become a world champion one day, I know this requires a great deal of hard work, and practice, but it will be a challenge worth the hassle, I will gather experience from the championships along the way to get there!”