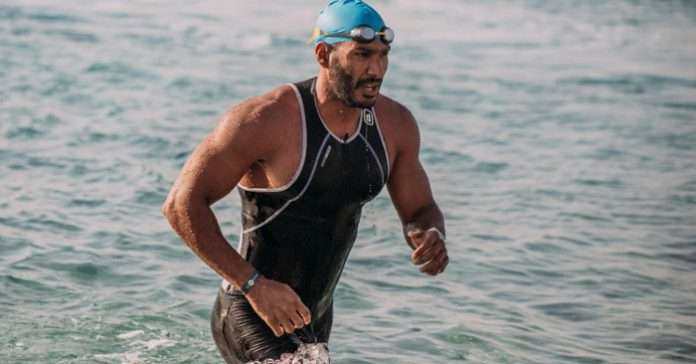 Omar tried a bunch of sports growing up including swimming, horseback riding, football and Muay Thai. When he was done with his studies, he wanted to pursue a sport to the fullest. He went back to his childhood encounters but found out that in these fields, with his age, he couldn’t get too far or advanced.

Omar fancies running and hitting the gym. He used to run up to 8 km every day, and interestingly found an app for running, that shows all the data, and competition with running buddies. After finishing his Master of Science degree in construction engineering & management, he wanted to tour our beloved Egypt and see every hidden and clear gem. One of his trips was to the captivating Aswan in 2016. There, Omar joined a 10 km run hosted by Tri-factory.

Although his friend encouraged him to join the shortest distances, a super-sprint triathlon, Omar found it a bit too simple. On the train to Aswan, Omar discovered the “Maadi Athletes” group who are all about triathlons. He got to know the Maadi Athletes and over-heard them speak about half and full Iron man races abroad and mention names of people who completed it and in which cities.

Omar found the Ironman race challenging and promising and wanted to take a leap. In Aswan, The Tri-factory announced organizing the first spring edition of Sahl Hasheesh Triathlon in 2017. Omar was not ready, but he was ready to figure it out.

After he registered, he started hitting the pool to practice swimming. Omar hardly completed 50 meters, and he MUST swim a 1.5 km distance in the actual race. That incident made him hesitant about going forward with the challenge, yet he still did. Up-ing the game, Omar kept practicing for 2 months harder and smarted, hoping for the best.

The world of cycling was never his expertise, Omar just took a pick for the race , and joined a riding event in April hosted by GBI. A trip from Cairo to Fayoum that was 115 km long. Remembering the road is a downhill, Omar thought it would be easy but little did he know.  Omar lost his patience and got irritated on the way, but still made it!

The iron man race is a timed challenge. A WhatsApp group was created for those who were interested in joining the race. As the discussions were getting heated and the spots were getting taken, Omar needed to decide to join or not, and he did! The logistics were pretty high, a participant needs a lot of equipment, nutrition, clothing, and gears. Omar self-trained and planned his own nutrition.

The half iron man race was in Portugal, where the 1.9 km swim was in the open ocean in the freezing water at sunrise, it was difficult to breathe, and more challenging to last through phase 1. Omar did it, keeping his head above water, slow, but steady and going. The 21 km run was very tough but Omar tried cutting the distance down km by km.

“I learned a lot in this journey. The bike route was flat but was changed on short notice to become a 40 km flat trail followed by a 40 km climb, and finishing with a flat 10 km. I was not ready or trained for this. After getting off the bike I couldn’t move a step, every muscle was cramping and it was painful trying to stretch , I finished nonetheless. No matter the obstacle even if slowly keep going one step at a time.”

In 2018, Omar fell more fond of the game and wanted to go deeper, he started investing in the right equipment, shoes, watch..etc. He was interested in a 2018 race held in France, and this time he was the one who created the whatsapp group, encouraging athletes to join. Omar  wanted to work and improve his swimming skills, and while he was taking his morning swim at the club, the swimming coach saw him and asked him to join the swimming team, and so he did, and he improved to the extent that swimming became his favorite part. “This was a great opportunity. Lots of athletes find swimming the hardest part in a triathlon.”

Omar was so excited for the race. But when he got his passport back.. there was nothing..no visa, and his year’s highlight was gone, vanished. Omar had to travel on a business trip for 6 months in KSA. Training was inconvenient for him there, he ate a lot to comfort his depression, and gained a lot of weight; 10 Kgs. His options were treadmill and a before-work swim. The absence of a target demotivated him…until..

A friend told Omar about a half iron man race in December in Bahrain. Despite the lack of practice, Omar joined to cheer up and find purpose. His weight gain showed in his cycling jersey and slowed down his performance, but Omar took a stand. He decided to lose weight and follow basic weight loss advice ( lower sugar- don’t eat fried food.. etc.). Omar’s  speed in running and swimming became splendid. Food played a great role, and so, he wanted to understand the science behind it, so he took a certification in nutrition from Canada.

2019 held a half iron man race in Marrakech. Omar trained so well. He learned a lot from his certification. “People don’t eat enough protein. My First client was my friend, he lost 8-10 kgs. My experience now makes me understand my clients very effortlessly.”

Omar ran 2 full marathons hosted by Cairo-runners in 2018 and 2019. In 2020, Omar’s target was to run an international full marathon in less than 4 hours. The options were:  Vienna, Paris, Barcelona, but he wanted Rome, even if he was to go alone.  After preparation, Italy locked-down due to the Coronavirus pandemic. Omar tried applied to Barcelona, but that event, was also postponed. He looked for a less mainstream location, with a smaller marathon, and found Ghent, Belgium… but the airport shut.

“I want to keep going, try to learn, read, understand all details in triathlons and specific weight and performance, take every chance and opportunity, have a growth mindset, and overcome obstacles. When I saw a plateau in my performance, I pursued a coach. Athletic performance became a priority. I learned from the Bahrain race that anyone can have challenges and obstacles, people should not compare themselves to others, but to their older selves, and that is how I grew and improved. I am my competition.”

With that mindset, we know he will!