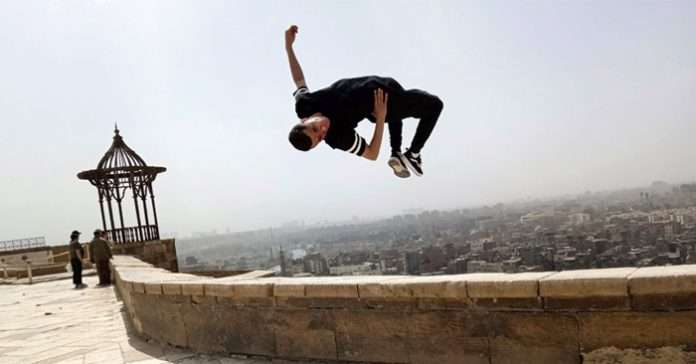 Omar Mokbel is 24 years old professional parkour athlete who gained interest in the sport roughly 9 years ago. It all began after he watched the movie District B13 by David Belle: French actor, film choreographer, stunt coordinator, and founder of the physical discipline Parkour.

Parkour quickly took over and became Omar’s life purpose. He graduated from the school of business but chose to try and make a living out of his passion for parkour instead of pursuing a business career. It was not easy, however, given how foreign parkour was and the pointlessness associated with it.

In 2015, Omar became the first parkour athlete to represent Egypt in the parkour competition “Wild Khaleeji” that took place in Doha, Qatar. Despite it being his first competition, Omar ranked 4th among some of the best athletes MENA had to offer. Four years of hard work later, he participated in both divisions of 2019’s Adrenaline Addicts vol.4 in Beirut, Lebanon -where he was also the only Egyptian representative- to rank second in both and win a Speed Run Division medal and a Freestyle Division cup. A few days ago, he ranked first in Power of Motion 2020 in Cairo and currently holds the title as the No. 1 Egyptian Parkour Athlete.

Omar utilizes social media to deliver his message and is constantly generating parkour content and educational videos. He has always been a hyperactive kid seeking distinction, and parkour provides him such outlet. He believes in never giving up on one’s dreams and his competitive nature always leaves him hungry for more. Inspired and motivated by the challenges, the people he meets along the way, the joy of traveling, and the spirit of adventure, Omar always managed to bounce back from injuries with a renewed sense of purpose.

Today, Omar is the first civilian parkour trainer at the Police Academy in Egypt and is working hard pursuing the World Championship dream. He’s made multiple appearances on TV shows, sports events, commercials, and live performances.