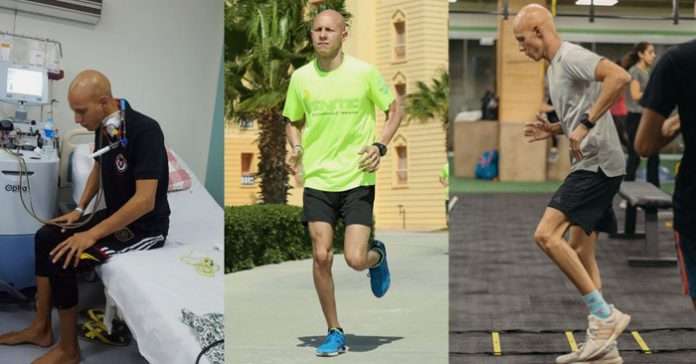 Sometimes, life creates extreme challenges for us so that we become aware of our strength, so that we may know ourselves.

A passion for something, for anything is a mighty weapon in any battle we must fight; Omar Sharawy, a two times cancer survivor, and performance training coach, narrates his story, and tells us what it was that got him through the difficult times.

As a child, I played tennis, and later, I became a professional football player until 2012, when the Port-Said incident took place. After I lost both my father and brother, I had to start taking responsibilities, to be more present at home with my family, and to manage the business.

Football specifically wasn’t that important to me, but sports always was. I kept exercising, and visiting the gym regularly. I incidentally found out that I have a lymphatic cancer, Hodgkin’s lymphoma, and unfortunately at a late stage, 4. It was when I had to go into surgery to remove the tumor in my neck, that the test results came positive for Hodgkin’s Lymphoma.

My doctor told me that I need about 6 months of chemotherapy, 12 sessions ( 2/month), and I will completely heal. After the first 3 months, I underwent a 90% improvement, which motivated me to withhold the 3 other months of my treatment. When I later had my tests and scans, they found out that I had a relapse, the activity and aggressiveness of the cancer increased.

Instead of fighting for 10% more, I had to fight for 20, and for 6 more months, I had to take daily intensive treatment, which is horrific, difficult, and rare.  This second phase was more difficult than the first, I was sick most the time. I was admitted to the ER one day, my kidneys, liver, and nerves were failing, my organs were shutting down, and the treatment was stopped.

I had to do a scan, to check the progress, and thankfully, the results showed I have been cured. After the treatment was over, it was time for an auto bone marrow transplant, the most difficult time. I had to stay in isolation after the operation for a never ending month. After I was released I took about 3 months to recover.

Working out during my treatment was never easy. I started performance training, and in 3-4 months, my body has been transformed, making me more fit than ever before, my body strong enough to do anything. I started taking a step forward  by studying to become a performance training coach; I had a background in training, nutrition, and healthy lifestyle ( as It is my actual lifestyle.)

Hussein Abdeldayem has supported me through my decision, I started studying, taking courses, and certifications. I wanted to be the best performance training coach in Egypt; training professional athletes, whether in football or tennis, or any international sport.

I started by working with a professional football team in Alexandria for a season, I then came back to Cairo. I’ve spent 1 and a half years working , coaching, and guiding athletes. 1 year ago, I went for my regular checkup and discovered I have another tumor. I had to go through another surgery, and found out I have been diagnosed with a non-Hodgkin lymphoma, a more aggressive cancer. All the news that was a shock to me and my family.

For the first few days, I took the decision that I do not want to go through the struggle of treatment again, I would just train, and live a healthy lifestyle, and whatever happens shall happen. That decision didn’t last long though, and I had to go back to the doctor. He said I was “ lucky” that this is a different kind of cancer, and that I do not have to go through another bone marrow transplant.

4 months of chemotherapy this time, followed by radiotherapy. we agreed that I will go to work, train, coach, and resume my life normally. I started taking my treatment, chemotherapy every 21 days. I would fluctuate between a week where I am not feeling well, a week where I can hold myself up a little, and a week in the hospital with a weary body and low immunity, and the cycle lasted for 3 months.

I Had a scan the 4th month that cleared me, I took 2 more sessions as a prophylactic therapy, then radiotherapy. I finished treatment last September , and since then, I started a new chapter of my life, taking care of my health, handling my stress, and my training,  to work harder to become the most successful performance trainer in Egypt.

Sports was what made me get through most of the pain. I changed my eating habits, cutting dairy products, red meat, and sugar, the cancer food. I feel better now, weightless, more productive, and happy. At a point I was an athlete who saw helplessness, and I decided to overcome being on a hospital bed, fighting illness to become a fit athletic person again, this is what I want for myself, and other athletes.

Today, I am training professional athletes who are the Olympics, those who are into football, tennis, archery, and karate, as well as gymnasts. It is my responsibility to train them to perform and to strongly compete for their own desired goals and titles.