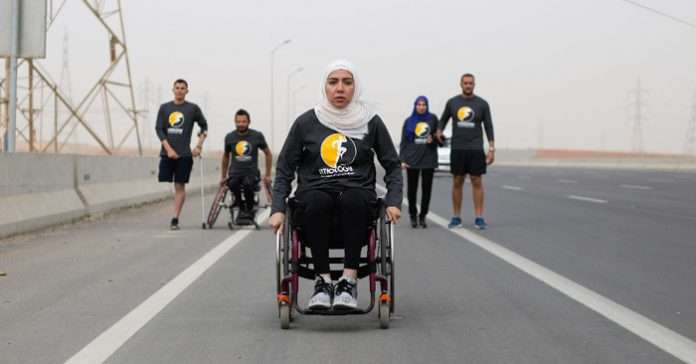 Omneya el Yamany has decided to overlook every pity talk, and label that was given to her, she chose to show everyone who listed all what she can’t do, what she can do. When the options given to her did not suit her will, she was rather eager to create an option of her own. This is her story

Omneya was the first wheelchair user in Egypt to skydive, in 2014. She also joined a 100 km, 3 days walk that was held for a cause, from Cairo to Ain-El Sokhna in 2018. In the last Cairo marathon, hosted by Cairo-runners in March 2019, Omneya was the Para race manager.

Omneya was in a car accident when she was 18 years old,  her doctor told her she was fine, except that she had to be on a wheelchair for the rest of her life. He suggested she hires a nurse and a driver to help her out. By that time, Omneya was just getting into college.

“ I felt down, what do you mean a wheelchair for the rest of my life? No living the college life and my youth at its fullest?”

Omneya traveled and learned that you could help yourself, mastering the different ways to being independent.

“ Before I traveled, I had my family and friends always helping me do everything, even what’s simple, like getting dressed and getting out of bed.”

Omneya was advised to work out, and she never really liked the gym, even before the accident, she only played tennis, and Zumba. She wasn’t fond of using gym machines or weights, she believed it was torturous.

After she became self-reliant, Omneya could manage and became used to doing everything on her own, she still didn’t accept the concept or feel the need of working out. She started learning how to drive in 2017, and then she had to manage to get her wheelchair in the car.

“It is about 6 kgs, which is relatively light, but for me at that time, it was pretty difficult to get it in. First time I took the chair into the car, it was like a workout, it took me 10 minutes of extreme effort and sweating. I decided I must strengthen my arms to help me out.”

Days later after starting training, she could feel that she is getting stronger already, she could get her wheelchair in the car with less effort. About a week later, the process became much easier.

“CrossFit helped me a lot with my daily life activities in general, I also found the concept of going to gym more acceptable now.”

“No one told me that sports and managing by myself is an option, the doctor suggested  that people take care of me. I didn’t believe that working out could help me out that much, and I got to understand that when I saw that I couldn’t manage. It helped me physically and mentally, and made me much stronger.”