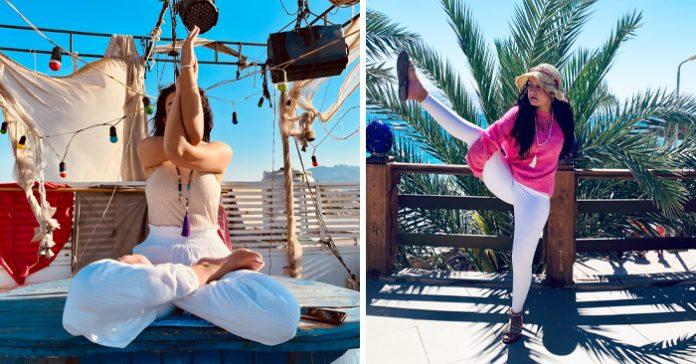 A pharmacist and a yoga teacher in the serene city of Dahab, meet Reem Hesham, a young yoga enthusiast, and get to know her story.

“For a girl in the beginning of her twenties, it was hard to find the light to guide her through life. Yes, she was me before yoga,” said Reem. “It was an unpleasant chapter in my life. I was confused and stressed about everything in life. Then, i had a chance to attend a yoga class. it was in 2017. That day I felt something. I couldn’t figure it out.”

A call to the soul, Reem became a consistent student. That was the turning point of her life. The light she found in the darkness. “The amount of self awareness and the love i felt! I started practicing at home almost everyday to become more aware.”

Birth of the dream

During university, her dream was to become a yoga teacher. She enrolled in an online program conducted by an Indian yoga school in Rishikesh – the mother of yoga. It was an entire month of studying and practicing yoga for the the whole day that she felt she was there in India, saying that the teachers and the gurus were so friendly and spiritual. Shortly after graduation, she was done with her 200 hours of TTC program, becoming eligible for being a yoga teacher.

By the time she finished her TTC, the world was beginning to breathe again after the pandemic, and so she had the chance to work in different yoga studios in New Cairo, Mokkatam, Obour City, and Helioplis. She joined yoga retreats to Dahab. And she even gave online classes for KSA students during the quarantine.

She exerted a great effort studying, practicing, and attending many yoga classes. Simultaneously, she worked as a pharmacist, but later, she decided to commit to her passion and quit the medical field temporarily. “It was a challenging decision as my classes weren’t stable. It was an ups-and-downs period in my life. But it went good eventually.”

“For me the only thing that makes me happy while teaching is the smile on my students’ faces, the amount of relief they talk about in their bodies,” explained Reem. She used to teach people with injuries like back pain and neck pain. After months of practicing, they told her that they stopped going to the physiotherapist and that they had felt way more better. “One of my students sent me a message that after practicing with me, she can now pray without using a chair and she can move freely. I swear i love my work because of these comments.”

For now, Reem relocated to Dahab, the land of peace, where she works as a yoga teacher and a pharmacist. “Dahab gives me the energy I need to find the best in me. So grateful for all of these ups and downs that gave me the chance to find myself.”

When asked about what she hopes for the future, she said: “I hope life takes me to better places, places that will be close to my heart and the way it feels to be truly me.” There’s no better wishes to meditate on.