Home News “Rugby League is a war without the frills” 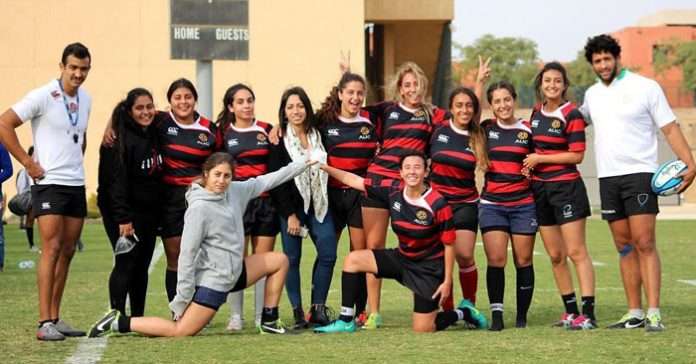 Farah Omar highlights all the ways Rugby is unique and different from American football. She introduces us to the what’s and how’s of Rugby, and her very own team, the AUC Wolves.

The ball we use in Rugby, is a little bigger, rounder, and less pointy than the American Football’s . Here in Egypt, we play our matches in a regular 11 players soccer field.

Rugby is mixed up with American Football for being a contact sport, yet they are completely different. In Rugby, we don’t wear any gear at all, just a kit like that of soccer players, jersey, shorts, long socks, and cleats.

The aim of the game

Simple. Use the ball to score more points than the other team. You can run with the ball, kick it, and pass it, but no forward passing. The only player that could be tackled, is the one that has hold of the ball, which means tackling any other player would get you a red card.

The tackling rules are:  Only tackle below the hips. A high tackle ( above the hips ), for example, a wrap around the neck, introduces you to a yellow card, which gets you suspended from the game for a few minutes. Tackling is different than hitting, we usually try to tackle our opponent by closing their legs, so that they lose balance and fall, no matter how big or strong the player is, this technique always works, and if executed correctly, no one gets hurt.

Usually, the two teams face each other, and the player who gets the ball can pass through the other team and gets to the end of the field, then he/she must place the ball on the ground. That would be considered a goal, or what we call it a “ try” in rugby, which is worth 5 points. After we get a try, we must kick the ball through a post, and that is an additional 2 points, 7 overall.

There are around 6 girls teams in Egypt, 3 of them in Alexandria. I play with the AUC Wolves since 2015. My team travels to compete at Dubai’s 7’s Rugby tournament which takes place every December. The event lasts about 3 days. Aside from playing, we get to meet international Rugby teams competing against each other, which is thrilling and awesome.

Aside from Dubai’s annual tournament, there are local tournaments all year, held in Cairo or Alexandria, where we compete to win the league or “ eldawri”. They usually last for an entire day, where we play about 5 to 6 matches.

Rugby is with no doubt a tough game, but I don’t like how girls who play are stereotyped for being masculine. I believe that the best thing about Rugby is that it could show how girls could be strong and feminine at the same time!

we may be on the field covered in mud and grass, with bruises all over us, but we could also be gorgeous, with our hair perfectly done and our makeup slaying, in breathtaking dresses, and clicking high heels; we are the girls who can do both, and enjoy them equally.

The Beauty of the game is that you can find many characteristics within it, a unique blend of strength, power, speed, agility, and endurance; Hard work, determination, teamwork, respect and resilience, are also part of any Rugby athlete.