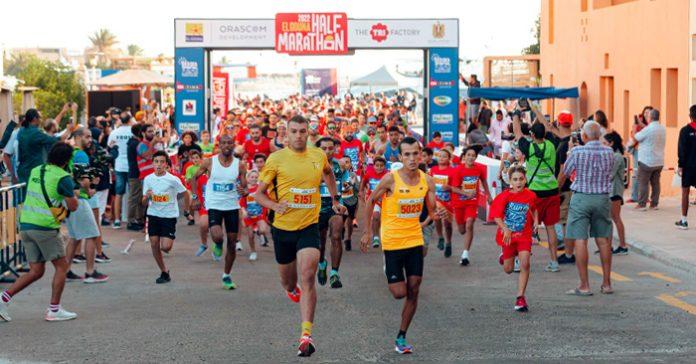 Today was the kick-off of the 4th edition of  El Gouna half marathon. Inaugurated in 2019, El Gouna Half Marathon is one of the fastest-growing sports events, rapidly becoming one of the most significant marathons of Egypt, even attracting athletes of over thirty different nationalities. It is organized by the trifactory, a prominent sports event organizer, in collaboration with Orascom Development and El Gouna Red Sea. The event is organized under the auspices of the Ministry of Youth and Sports and supervised by the Egyptian Athletics Federation, ensuring the meeting of running international standards.

The runners have arrived a couple of days earlier at Cheeky Monkey, Abu Tig Marina, for collecting their packs and race number. Due to some circumstances, the race was postponed one day, taking place on Saturday, the 12th of November, instead of the 11th of November, the originally announced date.

The 21km long run began at 7 am in the morning, taking the runners on a beautiful road carved within the magical and scenic spots of the coastal El Gouna city falling on the splendid shore of the Red Sea. The runners were required to finish the course of the run within a maximum limit of three hours. All participants received a trophy medal upon finishing the race; the top three males and top three females received a gold, silver, and bronze medal respectively in addition to a special prize.

El Safa Hospitals and Alpha Medical Group were the medical providers of the event. Ambulances were based on the start and the finish lines as well as three significant spots, prepared in advance for any arising emergency and ready to assist runners in need of medical attention. In addition, the performance of the runners was monitored by mobile event organizers, equipped with First Aid essentials.

This marathon was attended by Eleonora Gardelli, an Italian marathon champion. She expressed her excitement about partaking in that marathon in an Instagram video posted days ago. Also, the twice Olympian (Rio and Tokyo), Zane Robertson, ran on El Gouna marathon road.

Indeed it was a happy opportunity for all participants to run next to them.

Jomana Yasser returns to life after her heart stopped beating.

Alexandria Marathon Is Back For A New Edition