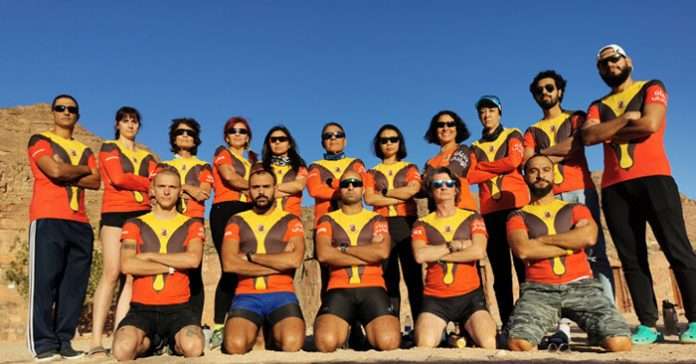 Raïd, a business executive, serial entrepreneur, SME advisor, father of three, and a sports enthusiast tells us all about trail running:
What it is, what it’s not, why trails, where to run trails and why Egypt is a spectacular trail running destination. Read along to know how it all started, evolved and where it’s going!

From a young age, Raïd had his share of playing different sports such as basketball, tennis and squash. Until professional work-life kicked in, full force. Years later when he returned to sports, his comeback was quite a story. In 2010, Raïd decided to use his lunch break at work to get back moving, and by moving, I mean running!

He joined Cairo-runners, whom he called “the catalysts of the current sport scene in Egypt”. Always referring to Ibrahim Safwat (Cairo Runners‘ founder) as the man who made him run. He joined Cairo Runners’ very first weekly runs in Maadi, where he lives, and soon after participated in their first ever half marathon. Soon enough, Raïd was accepted into Maadi Runners, a private running group founded in 1999 by Mohsen Alashmoni and together he ran his first full marathon in Trieste, Italy.

After running many marathons in Egypt and abroad, Raïd was tempted to try something new when he heard that the Trifactory are organizing a “Triathlon” in Sahl Hasheesh! Along with other friends, he formed Tri-Wezzas, the outlier triathlon team that aced top 70.3 half Iron distance places in Sahl Hasheesh! Raïd went on to complete several international Ironman 70.3 races under the Maadi Athletes flag.

Occasionally, Raïd used to run with friends in Wadi Degla Protectorate in Maadi. However, his real trail running journey started when he and a couple of fearless running friends decided to sign up for the infamous Marathon Des Sables (MDS), known as the toughest footrace on Earth! The MDS is a 250 km multi-stage ultra-trail race, which takes place in the Moroccan desert over 7 days. It is a self-sufficient race; runners carry all their food and gear throughout the 7 days! To train for MDS, Raïd started running regularly in Wadi Degla Protectorate, which encouraged others to join him. Slowly, a trail running group was formed.

In 2019, after his return from Ultra X Jordan, a 250 km multi-stage ultra-trail race in Jordan’s Wadi Rum desert, Raïd founded Wadi Ibex, the first trail running team in Egypt. Wadi Ibex Vision is: To position Egypt as one of the top five global trail running destination. Its Mission is: To promote trail running in Egypt by raising awareness of the sport and the trails. Raïd leads Wadi Ibex and together, they host a trail run every Saturday in Wadi Degla Protectorate, and welcome anyone to join. They also organize ultra-trail races for the more experienced trail runners. Everyone is welcomed to try trail running, but first things first…

Trail running is running in raw nature, untampered by humans, far away from the city life, and right in the middle of preserved land; Sandy, slippery, rocky, bumpy, hilly, and wet or whatever it may be… this is your track. Trail running is beautiful, but not a joke, you must be prepared. When you go for a trail run, you always need to carry your own gear (1 liter of water per hour to avoid dehydration, electrolytes to prevent cramps, nutrition to refuel your energy, and whatever you need to protect yourself from the sun!).

Trail running is not only about running: it involves a lot of power walking or hiking with a fast pace (your go-to mid-run hack). Some trail runners use hiking poles as support, especially in uphill and sandy trails.

Training for trail running is broken down to two parts: 1. Running (streets, tracks, trails) and 2. Cross training (Cardio, yoga, strength training, rowing, cycling, swimming…) to build and prepare your muscles for the hills and valleys of nature. Everything you do in training, you take with you to the race! Everything should be the same on race day as it was in practice; same shoes, same nutrition, same running gear, same everything. You never try something new in a race. Never!

Where to trail run in Egypt

Where not to? Our beautiful Egypt has two protectorates in Cairo: The Petrified Forest Protectorate in Tagamoa (Elghaba el mota7agera) and Wadi Degla Protectorate in Maadi. Both are great options for trail running inside the city.

An hour away from Cairo. Fayoum has three natural protected areas with great trails. Then there is the spectacular Sinai peninsula with limitless locations for trail running, including St. Katherine area, which alone, houses dozens of mountains like Mount St Katherine, Moses, Abbas, Alahmar, Moshomor, Tarboush, Serbal, … And the famous Sinai trail, which started as a 220 km trail and now extending to 550 km!

Then there’s Dahab, Nuweiba, the Red Sea Mountains, with its newly developed RSMT trail by Omar Samra, and the huge Eastern Desert…. and the list goes on!

Trail running comes with tons of benefits, starting with the beauty and serenity of nature, but that’s not all. Trails make you stronger, more reactive with faster response. It connects you with the environment, gets your whole body working (upper and lower), engages major and minor muscle groups and conditions your body for endurance and stamina. Raïd promises that everybody who experienced trail running loved it. His favorite connection with trail runs are through the blue skies, the sand, the mountains, and the endless beauty of the outdoors, away from the city. It has the “towards” kind of running, not the “away from”!

Raïd’s invitation to you: Come run with us, like you never ran before