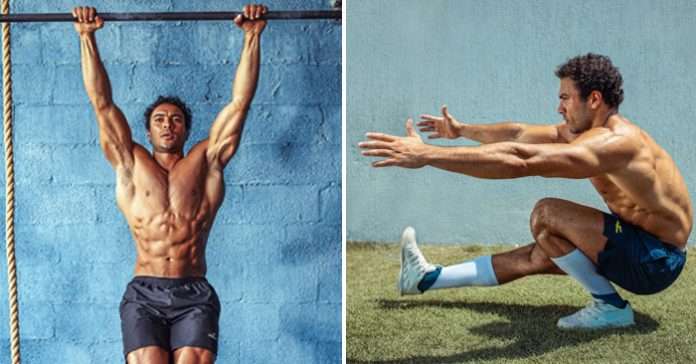 Read along to know Sherif Alaa, Zamalek Sc ex-football player, and athlete who took a turn into the world of CrossFit after 16 years on the football field! Walkthrough his story, his chances, and his fondness of life-turning results!

Sherif Alaa is an ex-football player, he’s been in the field since he was 9 years old, starting in Al Mokawloon al arab Sc, where he played until he turned 21. Sherif was team captain in Al Mokawloon al arab Sc, playing alongside, Mohamed salah and Mohamed El-neny.  He signed with Zamalek Sc, where he played for 1 year, being part of winning both the cup and league in 2015-2016. He then moved to Petrojet Sc, Tala’ea El Gaish SC, and El Sharkia Sc. Sherif decided to end his football journey at 25, as his football career did not go as well as he planned. He had no injuries but he hasn’t found himself in the field of football anymore. His decision to leave the arena was not very much comprehended by family, friends or colleagues.

Sherif had to leave unfinished courses in university to pause joining the Egyptian army in order to have more time to play football. After leaving, Sherif studied to pass the remaining courses to finish his service in the Egyptian military and live a free man! He spent a year in service, working on building a fit and strong physique, stronger than a usual football player’s thinner body.

6 months before starting his service, Sherif was asked to PT at the gym he used to train at, taking a huge part in helping people meet their goals and transform their lives besides their body. Time in service was pretty hard at first, but Sherif managed to find an opportunity to use the gym there, and started training with the minimal equipment around. When he got out, sheriff started putting together a mini rooftop gym to train at with his friends. Later, Sherif created his own private gym at home. At first, not many people knew about it nor about the fact that sheriff made an exit on football.

3 years has now passed for since the start of Sherif’s private gym, where he, his friends, and football mates train. Sheriff plans to open his own public gym very soon; S force, a platform for stamina, speed, and strength. From football to CrossFit sheriff and S force will be providing performance training for all kinds of athletes coming from different sportive backgrounds.

Sherif has not only taken many courses to become better and help others do so, but he is continuously reading, learning, and keeping up to date in the field of fitness and health!  Sheriff and the S team believe that every athlete needs a customized, specific program to achieve the utmost results, some of these programs range around weight loss, strength, hypertrophy, athletic, rehab.. etc, alongside a supportive diet plan!

“Life is a lot like soccer, we always need GOALS!”