Modern bodybuilding supplements are often marketed as promoting various desirable processes related to improving nutrition, enhancing body composition or improving lifting performance. Supplements are often categorized accordingly. While many of these categories are based on scientifically based physiological or biochemical processes, their use in bodybuilding parlance is often heavily colored by bodybuilding lore and industry marketing and as such may be deviate considerably from traditional scientific usages of these terms. 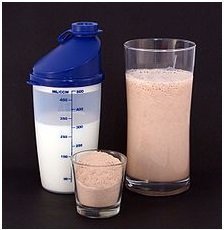 Protein milkshakes, made from protein powder (center) and milk (left), are a common bodybuilding supplement.

Bodybuilders often supplement their diets with a powdered form of protein. The powder is mixed with water, milk or juice. Protein powder is generally consumed immediately before and after exercising, or in place of a meal. Some types of protein are to be taken directly before and after a workout (whey protein), while others are to be taken before going to bed (casein protein).[4] The theory behind this supplementation is that bodybuilders, by virtue of their unique training methods and end-goals, require higher-than-average quantities of protein to support maximal muscle growth.[5]

Currently, no consensus has been reached in determining whether or not an individual in exercise training can benefit from protein and amino acid supplements.[6] Protein supplements come in various forms: ready to drink shakes, bars, bites, oats, gels and powders. Protein powders are available in a variety of flavors.

Shaker Bottle commonly used to mix supplements. Has mesh inside to avoid lumps in the mixture.

Although it is generally undisputed that athletes and bodybuilders need an increased intake of protein, the exact amount is highly individualized and dependent on the type and duration of the exercise as well as the physiological make up of the individual. Age, gender, and body size may vary this protein intake.[6] Some health experts have criticized protein shakes as being unnecessary for most people that consume them, since most users already get enough protein in the normal varied diet with enough calories.[6] However, there is some evidence to support the idea that protein shakes are superior to whole foods with regards to enhancing muscle hypertrophy in the one hour window following intensive exercise[citation needed]. Moreover, for athletes who do not have the time to prepare whole food meals on the run or immediately after exercise, a protein shake may be preferred for practical as well as performance reasons. Additionally, some studies suggest low-calorie dieters, vegetarians, haphazard eaters and those who train very heavily may benefit significantly from protein supplements.[7] Traditional nutrition theory states that the body can only metabolize 5–9 grams of protein per hour,[citation needed] and that excessive daily intake can cause weight gain, kidney problems, osteoporosis, or diarrhea. However, many bodybuilders report consuming hundreds of grams of protein per day to achieve maximal strength gains, so this nutrition requirement may only apply to the general public.[citation needed] Taking an overdose of protein can lead to a loss of appetite, which may be useful for some dieters.[8] Nutritionists claim that osteoporosis occurs from excessive protein intake because protein can put pressure on the kidneys and lead to bone loss due to calcium leaching.[1]However, recent research has cast doubts on these claims, and suggests that higher calcium excretion may be due to increased calcium absorption in the intestines due to protein intake.[9][10] Indeed, it is well known that dietary protein is itself important for bone growth, and some studies have found increased bone formation in response to exchanging dietary carbohydrates for protein.[11] Nutritionists also argue against increased protein consumption because weight gain may occur because, as the body cannot store protein, excess protein will either be burned as energy or stored as fat (if you are already getting the calories you need). However, dietary protein is converted to fat far less efficiently than either carbohydrates or lipids, so consuming a calorie excess in protein will result in far less fat gain that would a calorie excess of other macronutrients.[7] Research by Tarnopolsky et al. (1988) showed that for bodybuilding individuals, 1.90 g of protein per kg of body weight per day is recommended, whereas endurance athletes require 1.34g/kg/d of protein. Their findings indicated that protein requirements are actually much lower than might be expected and that protein supplements therefore may not be as effective as is popularly believed. However, it should be noted that both of these levels are significantly higher than the levels claimed to be necessary for the general population (0.8 g protein / kg body weight).[12] Studies suggest that there are different protein requirements for anaerobic and aerobic exercise. Endurance athletes in aerobic activity may have increased daily protein intake at 1.2–1.4 g per kg body weight per day where strength training athletes performing anaerobic activity may have increased daily protein intake needs at 1.4–1.8 g per kg body weight so as to enhance muscle protein synthesis or to make up for the loss of amino acid oxidation during exercise.

Amino acids are the building blocks of protein; the body breaks consumed protein into amino acids in the stomach and intestines. There are three branched-chain amino acids (BCAAs): leucine,isoleucine, and valine. Each has numerous benefits on various biological processes in the body. Unlike other amino acids, BCAAs are metabolised in the muscle and have an anabolic/anti-cataboliceffect on it.[14] BCAAs account for 33% of muscle protein.

Glutamine is the most abundant amino acid found in human muscle and is commonly found in supplements or as a micronized, instantly soluble powder because supplement manufacturers claim the body’s natural glutamine stores are depleted during anaerobic exercise. Serum glutamine is used by the body to counteract the acidosis that results from exercise; in order to replenish the loss of glutamine from the bloodstream, the body catabolizes glutamine from the muscle.[citation needed] Ingestion of supplemental glutamine may therefore help ensure a ready supply for the muscles.[citation needed] It is also argued that a deficiency may lead to a weakened immune system and wasting of muscle tissue.[citation needed]

Some studies[16][17] have shown there to be no significant effect of glutamine on bench press strength, knee-extension torque or lean muscle mass when compared to controls taking a placebo, though another study found that glutamine is beneficial in raising T-helper/suppressor cell ratio in long-distance runners.[18]

The essential fatty acids (alpha-linolenic acid and linoleic acid) may be especially important to supplement while bodybuilding; these cannot readily be made in the body, but are required for various functions within the body to take place.[citation needed]

Fatty fish, such as fresh salmon and trout are rich in essential fatty acids and fish oils can also be taken in supplement form.

Flaxseed oil, often sold as a supplement on its own, is an ideal source of alpha-Linolenic acid, which can also be found in walnuts and pumpkin seeds.

Meal replacement products (MRPs) are either pre-packaged powdered drink mixes or edible bars designed to replace prepared meals. MRPs are generally high in protein, low in fat, have a low to moderate amount of carbohydrates, and contain a wide array of vitamins and minerals.

Prohormones are precursors to hormones and were most typically sold to bodybuilders as a precursor to the natural hormone testosterone. This conversion requires naturally occurring enzymes in the body. Side effects are not uncommon, as prohormones can also convert further into DHT and estrogen. To deal with this, many supplements also have aromatase inhibitors and DHT blockers such as chrysin and 4-androstene-3,6,17-trione. To date most prohormone products have not been thoroughly studied, and the health effects of prolonged use are unknown. Although initially available over the counter, their purchase was made illegal without a prescription in the US in 2004, and they hold similar status in many other countries. Additionally, their use is proscribed by most sporting bodies.

Creatine is an organic acid naturally occurring in the body that supplies energy to muscle cells for short bursts of energy (as required in lifting weights) via creatine phosphate replenishment of ATP. A number of scientific studies have shown that creatine can improve strength,[20] energy,[21] muscle mass, and recovery times. In addition, recent studies have also shown that creatine improves brain function.[22] and reduces mental fatigue.[23] Unlike steroids or other performance-enhancing drugs, creatine can be found naturally in many common foods such as herring, tuna, salmon, and beef.

Creatine increases what is known as cell volumization by drawing water into muscle cells, making them larger.[citation needed] This intracellular retention should not be confused with the common myth that creatine causes bloating (orintercellular water retention).

Creatine is sold in a variety of forms, including creatine monohydrate and creatine ethyl ester, amongst others. Though all types of creatine are sold for the same purposes, there are subtle differences between them, such as price and necessary dosage.

Creatine monohydrate is regarded as a necessity by most bodybuilders. Creatine monohydrate is the most cost-effective dietary supplement in terms of muscle size and strength gains. … There is no preferred creatine supplement, but it is believed that creatine works best when it is consumed with simple carbohydrates. This can be accomplished by mixing powdered creatine with grape juice, lemonade, or many high glycemic index drinks.[24]

Some studies have suggested that consumption of creatine with protein and carbohydrates can have a greater effect than creatine combined with either protein or carbohydrates alone.[25]

A thermogenic is a broad term for any supplement that the manufacturer claims will cause thermogenesis, resulting in increased body temperature, increased metabolic rate, and consequently an increased rate in the burning of body fat and weight loss. Until 2004 almost every product found in this supplement category comprised the “ECA stack“: ephedrine, caffeine and aspirin. However, on February 6, 2004 the Food and Drug Administration (FDA) banned the sale ofephedra and its alkaloid, ephedrine, for use in weight loss formulas. Several manufacturers replaced the ephedra component of the “ECA” stack with bitter orange or citrus aurantium (containing synephrine) instead of the ephedrine.

There are several naturally occurring plants, amino acids, and vitamins, as well as synthetic chemicals that are sold as supplements to increase testosterone levels. Some commonly taken supplements of this type are Fenugreek,Eurycoma longifolia, D-Aspartic acid, Boron, L-Carnitine and Tribulus terrestris.