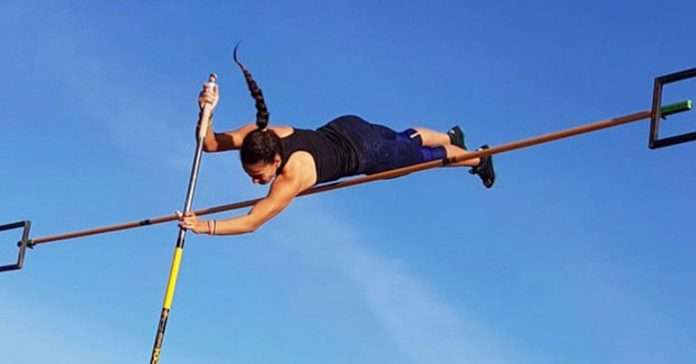 Yasmen Hazem Mostafa Abuelmaaty is a 19-year-old pole vault athletics champion, gymnastics coach, entrepreneur, and Industrial Engineering student. Yasmen started her athletic life as a gymnast. At the age of 11, she started athletics as a secondary sport, and that’s where her true talent shone. In her first year at the sport, she ranked first in Cairo’s Athletics Competition and kept her place in the 7 other Cairo’s Athletics Competition that she participated in over the course of 6 years. She also ranked first in 14 National Egyptian Athletics Championships between 2015 and 2020.  In 2016, Yasmen broke her first Egyptian record –which had been untouched for 10 years – and then broke 2 more in 2018. In between breaking national records, she was always breaking her personal ones, exponentially advancing as the years passed by.

Doing both Gymnastics and Pole Vault was applying too much pressure on Yasmen’s back, so she had to give something up. In 2018, she quit gymnastics as a sport and chose to rather channel her passion for gymnastics as a coach. Becoming a coach was Yasmen’s way of giving back to a sport that has given her so much. 2018 was a challenging year for our champion, but she somehow managed to break 2 national records, rank second in both the Youth African Games in Algeria and Cairo’s Athletics Competition, travel to Jordan to rank second in the U20 Junior Pan-Arab athletics Competition there, excel at her Thanaweya Amma, and manage her back injury.

In 2020, Yasmen ranked first in the Egyptian National U20, U23, and Universities Championship. Being quarantined, the little star discovered a new passion and quickly put it into action; Yasmen founded a tie-dye startup this July and named it Apollo. Having been a child athlete and growing up with so many responsibilities, the 19-year-old multitasker matured beyond her years. She understands the true value of time, is inspired by the constant challenges that life throws at her, avoids toxic relationships, and overall thinks more practically than most people her age. Yasmen believes that these are her years of work and will be sure to utilize every day of her 20s.

“There is no such thing as an excuse; if you put your mind to something, you’ll do it. Set 3 main goals every day and give them your all.  Always surround yourself with the right people and find something that you do for yourself. Training is what I do for myself; it is the time of my day that I enjoy most and it genuinely brings me peace. What does your time of the day look like? ”