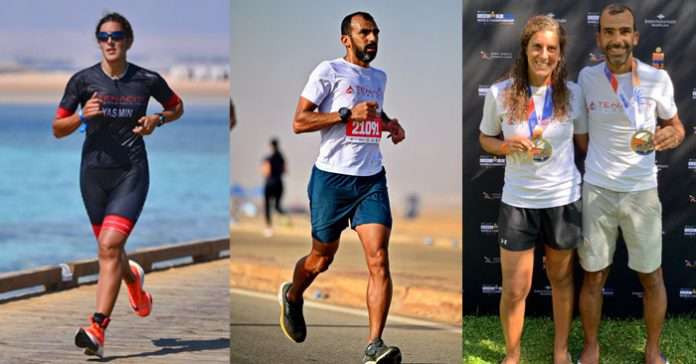 “Find someone who shares your passion, and do it together!” Yasmin Halawa and Ahmed Iraky’s journey’s intertwined! Despite their different backgrounds, and paces, Yasmin and Iraky believed that sports in general, and endurance sports in particular have the potential to turn around lives to the better. The duo established “Tenacity Coaching” in 2018 to help and guide others train for endurance races!

The first step in every journey

“My endurance journey began when I knew about Cairo Runners from a colleague at work. I started to run with them and I’ve participated in their first race in 2013, where I’ve noticed a couple of runners wearing the “Train for Aim” t-shirts with a “swim, bike and run” logo. I returned home curiously and did some research to discover and get to know about Triathlons and the IRONMAN race.

I was under the impression that these endurance races are definitely something beyond any human capability, however I decided to give it a go, and I joined “Train for Aim” and started my training with them. Soon after, I participated in my first triathlon with the team in Sharm El-Sheikh in March 2014, followed by another race organized by “Train for Aim” in El-Gouna. By then, I have already caught the triathlon bug, and I completed my first IRONMAN 70.3 in Budapest in August 2014!”

“I was working out with TFA on their fitness sessions, when they organized their Gouna event and some friends encouraged me to join. I completed the sprint race in the event and went on to participate in their first Sahl Hasheesh Endurance event, end of 2014. The first IRONMAN 70.3 I participated in was in Barcelona, 2015, at the age of 27.”

Iraky: Since I was 6 years old, I played Karate, and from the age of 11 to 20, I was competing at the national level, winning multiple nationwide titles. After that, I didn’t exercise any regular sport besides a few football matches, and visiting the gym twice a year only to activate my membership!

Yasmin: I’ve always been sporty, playing a range of different sports at school on both a local and national level (focusing mainly on field hockey and netball). I studied Exercise and Sports Science so I played different sports and just maintained my fitness level through HIIT sessions when I moved to Egypt.

How Two journeys became one

Yasmin: I met Iraky through TFA in 2015 and after a few failed attempts of completing a triathlon, I turned to Iraky to coach me for Barcelona IRONMAN 70.3 and 140.6 in 2016! At this point we were true amateurs, testing the waters and trialing all sorts of tactics in swim/bike/run. We had no idea of qualifications or World Championships or anything!

Iraky was a step ahead in IRONMAN racing, having already completed 4 70.3’s and 2 140.6’s. Iraky obtained his IRONMAN coaching certification in November 2015, as he wanted to take the first step to train in a more scientific manner, and started to be mentored by a coach from Germany.

A Journey full of streaks

“Triathlons became part of our lifestyle. We trained consistently for 2 years (2016/2017), gaining experience through different IRONMAN races, and traveling to different countries which was a double win for us, our families and our friends!

Meanwhile, we started guiding and helping friends and acquaintances to train for endurance races then we established “Tenacity Coaching” in 2018, and we managed to qualify for the first time to the IRONMAN 70.3 World Championship in the same year in South Africa!

Inspiration and passion; The driving factor

“Throughout the years we developed a belief that every human has an athletic potential that can be unlocked by proper training. Based on a scientific approach, regular follow up, the right mindset and considering their lifestyles. It is amazing seeing yourself achieve things you thought are impossible only a few months ago!

We are passionate about supporting and seeing people who trust us go through a transformation across many aspects of their lives, using triathlons or endurance sports as a tool. Triathlon and sports do not only help them physically but they go way beyond that!

Tenacity coaching managed to include 150+ IRONMAN participations in the last three years, training a vast range of profiles of athletes from working mums, top business executives, pilots, to individuals who have specific needs e.g., Diabetics and physically challenged.

We are still developing as athletes and coaches, as it has always been about the journey not the end result!”