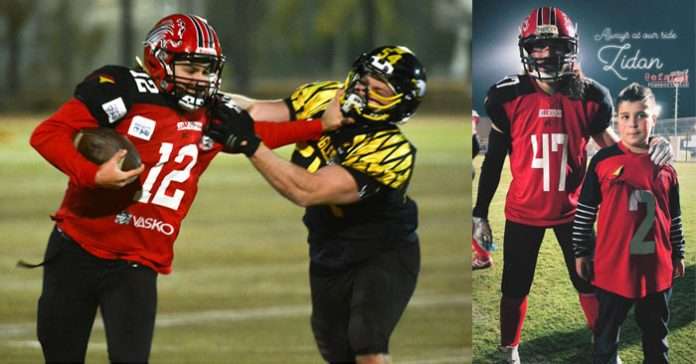 The 9 years old boy has been diagnosed with Autism early in his childhood. He has kept a large distance away from people, and avoided playing with other kids his age ever since.

So where did the story start?

Zaiden’s mother, Heather Gracia, moved to Egypt for work. Heather found the Cairo Hell Hounds page on Facebook, and knowing that American Football is her son’s favorite sport, she contacted the page, explaining his situation. She asked about the games and the possibility of attending them.

Accordingly, the Hounds replied right away, inviting the small family to attend their game, and not only to watch, but also the team managed to go above and beyond coordinating with EFAF, to allow Zaiden to play for a drive before the game against the MSA Tigers and score a touchdown.

Since that gesture, Zaiden has never missed a Hounds game and he has become their number one fan. He also attends practices with the team and joined the warmups. Omar El-Ghazouli explained to us how as they got to know Zaiden, Omar and the team saw a sweet child, who just needed a little push to shine. Omar also stated that during the practices, Zaiden gets to play with the ball as every Hounds’ player.

The team who welcomed the child as one of their own, has influenced many habit changes. Zaiden’s mother spoke to us about how Zaiden has become a lot more sociable since joining the team. That effect wasn’t only regarding his communication with others, but has also positively affected his health, influencing better eating habits.

As for the Hounds, many of the players are very attached to Zaiden, Mohamed Hamed, his current  best friend from the team said “I get my inspiration from him, he supports me as if he is one of my close friends, not just a child or a regular fan.”

American Football is definitely the ultimate team sport, but the positivity isn’t limited to players, but also to the family that can inspire many people, like Zaiden, who had drastic changes in  his lifestyle and personality since he considered the Hell Hounds “his family”.

“The Hell Hounds is the best team in Egypt, they won last season and they will win all the seasons  yet to come, forever. I wish I could play alongside them once I become 18.” said Zaiden Elghozy, the inspiration hero. We definitely can’t wait to see the day when Zaiden starts to play for the Cairo Hell Hounds!