Home Success Stories Zeina El-Alamy, A Rising Star in The World Of Volleyball 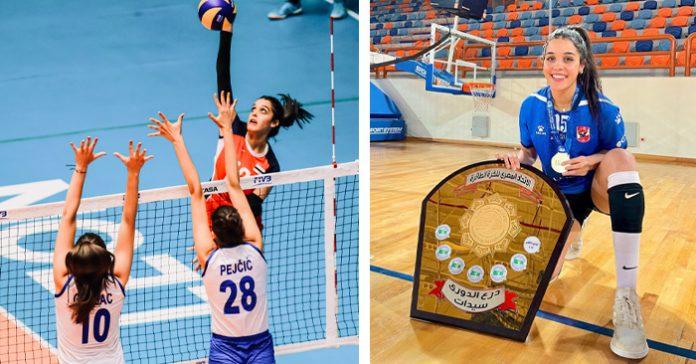 Zeina started her athletic journey at an age of 5. She was deciding between volleyball, basketball, handball and tennis. Her coaches were asking her to play basketball or handball because of her height, but volleyball was the closest to her heart.

“I loved the game from day one, I found it so exciting and suitable for me. It found me, and I chose it.”

“I’ve had my first tournament when I was 6, exactly after a year of joining the sport. I was the youngest person in the team. Because at that time there wasn’t a team for my age group, I played with the older team for around 2 years until another age group was created.”

“There was a time when I was playing with 3 different teams, my actual group kids’ team, the junior, and senior teams. I used to go to training 3 times a day, for a very long time. I played too many matches at a young age and I think that was one of the main reasons I gained more experience in the sport. I played different positions too, the first one was “libero” which I took a title for: “the best libero in the league: at the age of 10 years old. I then played position “3” for a while, before shifting to my current position “4”.

I was very tall when I was young, people noticed me easily because of my height compared to my age and to the other players. “

The Obstacles along the way

“Here comes one of the hardest obstacles I went through. In 2017, I played a match with the seniors and at the last point of the game, I jumped to shoot the ball, then landed in a bad way, twisting my knee and tearing my ACL. It was shock for everyone including myself, I was only 17. I’ve been away from volleyball for 9 months, and that was a transitional period in my volleyball career.

I aimed to work towards a goal of overcoming this injury and getting back better and stronger. I came to see that happen step by step, after 9 months, I got back into the game, back to doing what I love the most, and I was giving it my all, yearning to comeback stronger.”

In 2018, Zeina joined the national team again and they gloriously won the African championship, one of Zeina’s most precious and heartfelt championships ever, because it was the first one after her injury.” I couldn’t believe that I’m able to play and compete again after all what I’ve been through. It was a wonderful feeling that I will never forget. “

Triumphing Around the world

Zeina experienced different triumphs around the world. In 2019, she took the title of the “best scorer”, with 85 points, in her second world championship. In 2020, she joined the first team of the Egyptian national team. It was so important to her to play in the first team and it was a target for her since she was a child.” It was terrific to achieve one of my career goals. “

The team played in the Tokyo Olympics qualifications in Cameroon. Unfortunately, they took the third place and we couldn’t get qualified to the Olympics, but this one gave Zeina so much experience and strength. She hopes they can make it for Paris 2024.

“Coming to one of my achieved goals, was moving to Al Ahly Club last year. I really wanted to join this club since I was young and achieving this was one of the most important steps in my entire career. We took the Egyptian league and the cup but unfortunately, we didn’t win the African championship. However, it was a very special season to me and I’m looking for so much more this season. “

“Another win alongside the national team was the 6th place in the last Mediterranean games in Wahran, which was held the last month in Algeria. Even if it’s not the best result, it’s still a step forward to trying to compete again with the World’s best teams.

I would like to ask anyone who’s reading this, to keep fighting and to never lose hope. If you want something, work very hard and give your all to reach it and grasp it. No one can stop you. Work hard every day and never give up, stay dedicated, stay humble and always stay motivated, nothing is impossible… the hard work really pays off.”

Mariz Doss on top of the world’s highest mountains

FTNS Truck, an impressive mobile gym right at your doorstep.