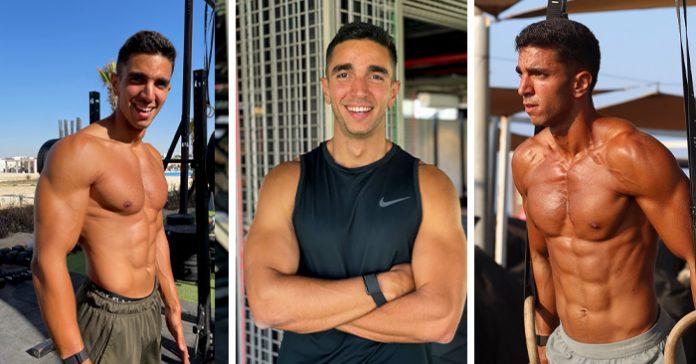 Ziad Mousa is a twenty-six years old coach. He graduated from the German University in Cairo with a major in finance and strategic management in 2017. His passion had always flowed along the river of the fitness world.

Since 2011, Ziad had been training sessions. At that time, knowledge around fitness had not been teeming and abounding as now; there was less awareness and a shroud of vagueness surrounding it. Fitness rumors flied everywhere. Ziad said that his training at that time was not efficient as he began with zero knowledge. With the flow in of fitness knowledge, his training improved, after four years of his start. In 2015/2016, he used to make training programs for his friends and family.

Aquafit – Into the Water

After graduating in 2017, the founder and CEO of Aquafit, Sherif Yassin, who is also Ziad’s childhood friend, invited Ziad for beginning with him the formation of a brand new program in Egypt provided by Aquafit, which was…fitness on the water! “People could expect to find aerobics and yoga in the water, but never have they heard of fitness on the water,” said Ziad.

On boards floating on the water, the trainees would concentrate to maintain their balance as well as doing their fitness workouts. Ziad worked on building the program which was challengingly difficult as there was not a  similar program; it had to be tailored to fit Aquafit’s goals. The Aquafit program began in 2018 at Heicenda Red, North Coast. Being the first in Egypt, beginning the program was challenging. “It was hard to incorporate a fitness project on the unsteady water surface,” explained Ziad. “Some people were reluctant to train in the water and under the sun.”

However, by the progress of the program, it proved to be a huge success, an exciting attractant for fervent athletes who relished the water’s splash. Aquafit started with two boards but ended up that year with 20-23 boards. In addition, they provide three complete fitness programs.

Turning away the corporate world

In the dawn of 2019, Ziad started working in Orange, a job related to his field of study. However, midway through the year, he found out he couldn’t divide his focus between the corporate world and Aquafit. He found out that he hated the corporate world. Hence, he quit Orange and spent the summer on the waters delivering the Aquafit program. By 2019, Aquafit needed no more introductions; everybody knew what was it and they were thrilled to give it a go. When summer was over, Ziad decided to surrender searching for jobs in the corporate world and to devote his entire attention to his passion. He was giving sessions in Aquafit. That was when Aly Mazhar, the CEO and founder of BeFit, suggested for Ziad to complete the AFPT diploma and become a coach at BeFit. As Ziad explained, the diploma was very challenging; it needed its rich share of studying while he was not a study-person at all. It was like college time had been revived. Anyway, he completed the diploma, and in the early 2020, he became a fitness coach at BeFit. Being a GUC graduate and working as a personal trainer and not in the corporate world was an act that was criticized by his parents and close friends. Yet, Ziad confronted them that his life choices were his own to make. He craved to prove himself in his own field. By February, Ziad received some clients to give them personal sessions, an achievement that he was proud of. Little did he knew about the dark wave that was on the cusp of drowning his success.

With the outbreak of Covid in March and the announcement of the curfew, all gyms were shut down. To Ziad, that was a heavy tragedy for his career. He had just gave away the corporate world for the gym dedication. He had just defied his parents and aspired to prove himself. But then, covid shattered all of his progress and persistence into splinters. He remained desperate for a period of time. Then, BeFit launched the ‘BeFit at home online programs’, igniting a spark of hope. Seizing the chance, Ziad trained 10-15 clients online. It was a record. He used to deliver customized programs depending on the needs and equipment of the client. Until the gyms were open again, he was able to provide for himself. When the darkness cast by covid began fading, and the springs of life returned blooming, Ziad worked in BeFit Sahel, then, he worked full time in BeFit Waterway. There was a resistance from people due to the still present outspread of covid, nevertheless, BeFit was – until now – one of the most bustling gyms. “It is a spirit, a community created in Waterway.”

Later, Ziad Mousa became a headcoach at BeFit, Mivida branch. He leads a team of six coaches. “By that, I implement strategic management, my field of study, with my passion for fitness.”

Ziad has coached between 200 and 300 trainees. For proving himself, he worked from 7am till 10/11 pm, five days a week, in waterway branch in 2021. Sometimes he used to sleep at the office at midday for sustaining his activity. He completely sacrificed social life. But in the end, he reached what he desired, becoming one of the highest achieving coaches of BeFit and a headcoach at Mivida branch. “As long as you work hard, you will get your reward.”

“How would you propose? Where would you be after 10 years?” These are all demotivating words thrown at Ziad by his family, friends, and cousins. All of them stood against him and his choice of dedication to personal training. Not only those who were supposed to be his supporters hurdled him, but the attack of the unpredictable pandemic gave him a hard blow that had its effects for days. It was a period of depression, he said. The pandemic stripped everything away: his job, his progress, and his spark. And yet, after all that, his flag of success flapped. He became a headcoach at Mivida, and one of BeFit’s highest achievers. “If you follow your passion, you’ll work harder than ever. So, you should definitely go for it.” he said. “Hardwork always pays off. You have to believe and keep pushing through.”

“My goal is to make people feel better mentally as well as physically,” he explained.  “Mental health is underestimated in Egypt. It affects physical health and both affect each other. Shape doesn’t matter.”

He also wants people to become process-oriented instead of results-oriented. To let them make training a habit. Results might now always happen, but training, it is always within hands. It pleases him when clients are frustrated when they couldn’t make it to the gym; now training became a habit for them.

One of the instances that satisfied him was when a client of his was keen on learning the techniques and the science behind coaching and fitness. Later, she left her field and became a coach. Changing from a client to a coach pleased him greatly.

“Remember, social media is tricky. Do not compare yourself to others since you only see the good, happy side of the person in a photo or a video but you never know what this person is going through behind the scenes.” This is his advice to people.

Mariz Doss on top of the world’s highest mountains

FTNS Truck, an impressive mobile gym right at your doorstep.